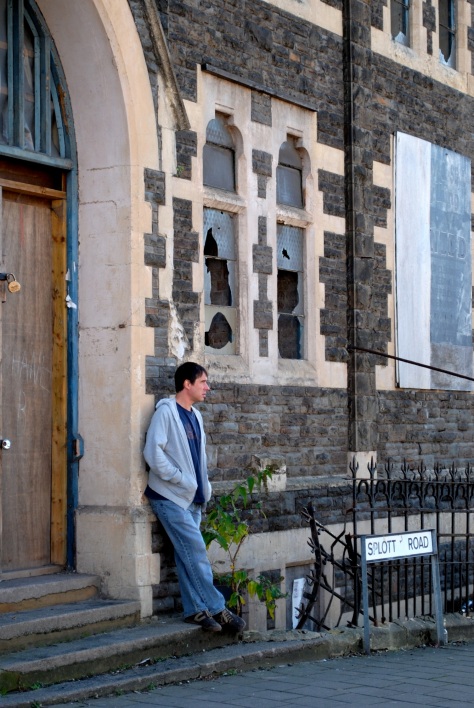 You know, there’s – like- nothing happening. A few cars going by, but there’s not even anyone hanging round the Spar or the Christian Centre that used to be a Bingo Hall like. So you know it’s like boring you know. When I say it’s quiet, there is a noise – it’s like a fridge being on, there’s a… thing you know…a…what do you call it … a buzz. It’s never completely quiet like, but it’s dull, really dull. I don’t know why I’m telling you this or anything you can’t even bastard hear me can you? You can’t even bastard hear me.

I knows why I’m saying it really, it’s something to do isn’t it? Something to kill the seconds and hours and days and weeks. Though I don’t know just where any of it’s gone, do you? I mean, there’s like some clear stuff, like light and day and stuff- I’m not retarded – and like summer and winter. But like, do you know what month it is? It could be July or it could be September who knows? I don’t. I don’t think you do. Is it important? I don’t suppose it is, but – like – nothing’s important anymore, is it like?

It’d like to know what month it is, cause like if it is September that would mean that my birthday would be coming up, but I suppose it would be bad to know that wouldn’t it? Would be a killer to know that you should be going on the lash, but that all you can do is to is to stand in the doorway of a rubbish church, that smells of piss and has broken windows, no one comes here, ever. Terrible.

I knows you talks, cause I can see your lips move, do you thinks you can hear me? Do you pretend? I don’t bastard knows, who knows?

Do you remember that time we tried to make up our own talks like? Remember? It was soon after, you know, when … just after … we gave up … just … gave up. Didn’t seem much point did it? I mean if we had managed to sort something out, it would have been shit wouldn’t it? I remember you when you were alive and you weren’t exactly Peter bastard Kay then were you? Dull to be honest. The only thing I can ever remember you getting excited about were the cheap breakfasts they do in McDonalds on a Friday morning. So it would have been dull like – boring – like everything else.

There is something I’d like to know from you mind. I’d like to know if you can see them. Can you see the others? I can see two of them, dressed like something from the TV, or from a game you know, old stuff. One of them is dressed like out of the Hitler war, I can see him clearly, but he doesn’t do much anymore, and there’s another one, I can just about see him. He’s down by the Co-op on Splott road and I don’t know what he’s dressed like, but he’s always jumping up and down and doing stuff, gets on my tits a bit if I’m honest, but what else is there?

I lied. There is something else I’d like to know.

Do you think that any of the living can see you? I’ve seen you make a start, like you’ve sat on a spike or something. I think … I think someone saw me once. There was this jacked up Subaru coming round the corner like what we did. They got the speed wrong and skidded, and I saw this kid in the passenger seat, and I saw that he was shitting himself like. I knows that. I was shitting myself when we went in for the skid. Then I saw this look on his face, a shock and it jolted me, like the time I touched that dodgy plug like.

I swear on my mother’s life, he saw me. It was like just a second, it was there, and gone. The driver was sharper than ours and got control and shot on down the road, I saw him laughing, but honestly the kid in the passenger seat saw me.

I don’t know why, but I was thinking about that for ages like. Sometimes it made me feel good, it was the first time I can remember anyone seeing me, it was like – I don’t know – like there had been something to me other than this, what’s now. It was over so quickly but I haven’t stopped thinking about it, and how long ago was that?

There’s other times when I think about it and it makes me feel bad, terrible like worse than most of the time, you know what I mean?

Look at the flowers. Look at them, there’s nothing there anymore, even the dead bits have blown away, I don’t remember when. All that’s left is the elastic band, and that’ll be gone soon. I don’t know why but that…that scares me, no, you know, freaks me out. I remember when the elastic band…when it was new and red, now look at it, grey and just hanging on, like my Nan.

I looks over at there at them lot going into the Christian Centre that used to be a Bingo Hall like and I look at the piss heads going in and out of the Old Illtydian R.F.C Social Club and coming out for a fag and I can’t make up my mind which building is a bigger waste of time. I mean what’s the point like? You know? What’s the point? You can’t even bastard hear me. Look at you now, look at you, flapping your lips, and that’s not even the worse of it. I’ve seen you looking out like one of those Zombies like out of a game or something, doing nothing for ages with your mouth open and just looking like, then it’s like you wake up or something. The bad thing is that I knows that I does it too. Sometimes I’ll be looking out and the next thing I knows it’s like night or something and I don’t knows what happened. That should be good like, you knows, time going like that. It should be good. It should be good. Still it’s better than thinking about – you know – how this like, all happened, how we got here. You knows, I don’t want to think about it, but I can’t helps it. One minute I was in the car, and then … and then … I was watching, it was like something out of a game, no one told me why or like how, that made me mad at the start it’s like really unfair, you knows? I mean why? Why you knows? I want to know when will it end?

Darren Floyd is a writer/artist who lives and works in Cardiff. His novel “Match Day” was published recently, and is available from Spillers and online here. He will be doing a reading in the Wellfield Bookshop tomorrow (Saturday the 16th of October) at 12 noon as part of the Made in Roath festival. Some of his paintings and random mutterings can be seen here. He currently lives in Splott.

Darren was photographed on Splott Road by Adam Chard