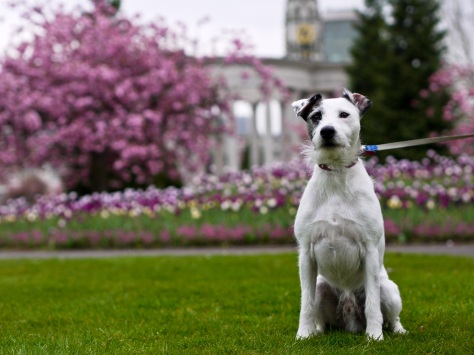 I may well have been born in Cardiff but my first real home began in Spring 2010 in Grangetown. They picked me up from the re-homing centre in Aberdare and I was a bit nervous when they first bought me indoors, took my lead off and told me I was home. I remember settling in fairly quickly though and enjoyed jumping all over the leather furniture and sitting in the window. It wasn’t long before I’d assumed the role of park warden for the park opposite our house. So many dogs coming and going but no one else seemed to be keeping an eye on them.

They really love me, the folks. They say I’ve made them into a little family. The three of us together. We cuddle up a lot and they throw my toys. I often call them The Ball-throwers. I really love my toys and I play with them all the time. They say I smile when I’m playing with them and it’s true.

I will never forget my first visit to Bute Park. It is huge! (Although a large dog did try and rugby tackle me which was scary). I loved the time they took me there for a picnic to meet a few of their friends not long after I moved in with them. I got a lot of attention. Lots of people in Cardiff know me. Apparently the first thing most people say to them now is ‘How’s Patches?’.

It may surprise you to know that I am the Executive Director of a business in Cardiff called Patches & Co. It’s a website that sells bits and bobs….it’s all very cute. We like doing it and there’s a drawing of me in the logo, which was designed by The Boy (theboytattoo.com) who works over at Alpha Omega on St Mary St.

I don’t get on very well with other boy dogs. But I do have two good friends who are female and they live by me. They are called Ruth and Tamsin. Ruth gives me a lot of attention but Tamsin snaps.

Beyond Cardiff my favourite places are Criccieth and Tenby. I also often go for a ramble in the Vale of Glamorgan. In fact, take me pretty much anywhere outdoors and you can’t go far wrong.

Patches is a Parson Russell Terrier and has lived in Cardiff for two years. He is the executive director of Patches and Co (patchesandco.com) where he sells cute bits and bobs with the help of his doting humans Julie and Kai Jones. He is a very active citizen of Cardiff and loves the amount of green spaces on offer.