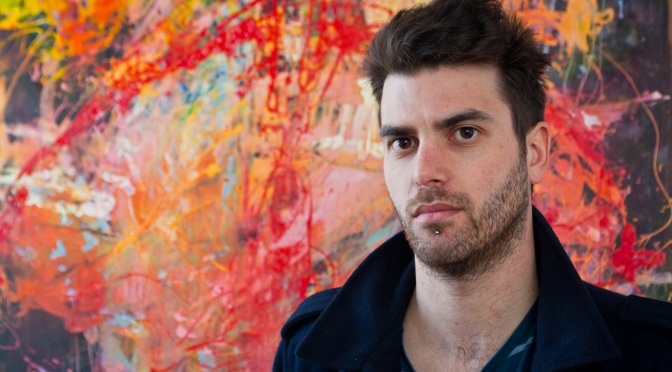 Despite not growing up in the “bright lights” of Cardiff I have always felt drawn to the city with its many different cultures – this is where I found my feet so to speak.

From a young age I’ve always been interested in all forms of art. After school was art college, where my interests also took me into music, through someone I met who is still a very good friend. Our friendship influenced me to be one of the founding members of bands such as Funeral For A Friend, From This Moment On and Dignity Dies First. This in turn led us to touring the UK including Cardiff venues Clwb Ifor Bach, Barfly and The Point (both since disappeared). Also parts of Europe in the back of tour vans – which still hold fond memories today and the amazing people I have met along the way who have helped to shape my life. I love an array of different styles of music and I believe that all music is one – there’s simply good and bad in every genre.

Through music I found poetry and philosophy, which in turn has developed me into an abstract artist known as “SnowSkull”, so-called after one of my favorite poets Gregory Corso and influenced by such artists as Picasso, Basquiat and Jesse Reno.

My plan is to delve into other aspects of art to experiment and showcase the alternative contemporary art scene which is already established in Cardiff with the likes of Chapter Arts, Project Ten and Tactile Bosch (to name a few), and independent galleries like The Sho and G39.

But it all began for me with my first exhibition at Milgi – a vegetarian art cafe run by sisters Rebecca and Gabby Kelly. It was these two young women who gave me the opportunity to showcase my art and I will be forever greatful for their help and continued friendship. You’re always sure to have a good welcome at Milgi’s – friendly staff, good organic food and a homely atmosphere. You can even pick up a bargain at the Northcote Lane Market, held at the Milgi warehouse on the first Sunday of every month, which also hosts anything from exhibitions to comedy shows and workshops. The Kelly sisters are very supportive of the local art scene, as they were when they co-ran the Cardiff Arts Institute with Kaptin and Matt the Hat.

Although only open for a couple of years, I loved the C.A.I. It was like a second home to me. I remember nights when there were sometimes just me, Kaptin and the bar staff watching great producers such as Ital Tek, Linton Brown & Pangaea who have all gone on to greater things since their Cardiff appearances. Word of mouth soon spread and before we knew, it was a thriving community where music art and friends came together on a regular basis, kind of like ‘The Hacienda meets Cheers’. Just before Cardiff Arts changed hands I was asked to paint a mural on one of the walls – of which I am still very proud of. Unfortunately, due to new ownership, my art is gone, along with the good times and bad hangovers.

Six months on I feel that Cardiff is not the same without the Arts Institute. It’s a shame because it seems that only commercial bars have the capacity to stay afloat. I have met people from all walks of life who have left their mark on me in some way or another. A big influence on my life is Kaptin – for me, one of the biggest personalities in Cardiff. He lives and breathes music and alongside local producers Stagga & Monky are known as the Chrome Kids – a family that I have recently joined. Chrome Kids are an electronic music and art collective. Our aim is to put on nights showcasing local talent. We also do a fortnightly month radio show on Radio Cardiff, generating an average audience of approx 500, but our intentions are to widen the spectrum.

I currently have a studio for my artwork at Warwick Hall. I share the building with an abundance of talent which varies from painters, photographers, ceramicists, graphic designers and installation artists who are coming together with plans to put on events and shows.

Music, art and poetry run through my veins and I have future projects involving all three. If I didn’t live in Cardiff I would never have had the opportunities I’ve had, or met the people who have influenced me. Who knows what the future holds – but at the moment I am happy to be living in Our Nation’s Capital – ‘Cardiff’.

SnowSkull is an abstract neo-expressionist painter and is part of the Chrome Kids family, Sleep Walk collective, DSY and The Nines. His hobbies include listening, looking, touching things and dreaming. Keep up to date on future shows and works at www.snowskull.blogspot.com or on Facebook or on Twitter @snowskullartist. He currently lives in Roath.