Hello friends. Happy International Womens Day! To celebrate, our friend Kelly Page has written us a We Are Cardiff about the first female professor to be appointed to the (at the time) Cardiff University. Go! Go!

You are living and working in Cardiff, the largest coal port in the world.
You are a woman, 40 years young, working as the head of women’s teacher training in the town’s new university.

The university, University College of South Wales and Monmouthshire (now Cardiff University) is only 20 years old. It was founded with 13 staff and 151 students, 15 of who were women (1883).

You are working at one of the first universities in Britain to open its doors to female students and with a residence specifically for women, Aberdare Hall (1885). A hall that is giving women from outside Cardiff the opportunity to attend university (and your training) without the stigma associated with living alone in rented accommodation. A hall, that is the second women’s hall of residence to be built in the UK (the other being at the University College London).

You’ve witnessed Cardiff Arms Park host its first international rugby match, an encounter between Wales and Ireland (1886); and looked on as the world experienced the first modern Olympics in Athens (1896).

The patent for radio communication was awarded just 7 years earlier to Guglielmo Marconi, with the first transmission from Flat Holm to Lavernock Point in South Wales (1897).

Sadly, a few years earlier Queen Victoria died (1901) after a 63 year-long reign. You and your colleagues are now living in the Edwardian era, as Edward VII has the thrown.
As you look around the town, not yet big enough to be officially called a city and years before it becomes the capital of Wales, you watch the hive of activity from the large coal port. You also see construction has started on Main Building (1903), a building that will take another 6 years to partially complete (1909) and define the universities campus.
You’ve taken a keen interest in the national movement for women’s suffrage, lobbying for political reform and militancy pushing for change. You want the right to vote.

From Bristol, Professor Mackenzie is described as an “enterprising colleague” and “absorbed in university teaching” who with her husband (also a professor at the university) liked to travel. She is a well-known educator and was head of women’s teacher training at the turn of the early 20th century, at what is now known as Cardiff University. 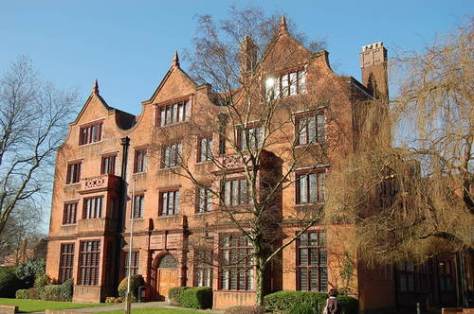 She is also the author of numerous books and lectures on education. Much of her work focused on the methods for preparing teachers for working in schools across the country and advocated co-educational instruction. She researched Welsh and UK schools and also drew insight from the US and European education systems. In 1894, with co-author Amy Blanche Bramwell, they wrote the title, Training of Teachers in the United States, a title that focused on the co-education in US teacher trainer schools. She also authored Moral Education: The Task of the Teacher (1909); Freedom in Education. An Inquiry into its Meaning, Value, and Condition (1925); and wrote Hegel’s Theory and Practice of Education (date unknown).

Professor Mackenzie was a supporter of the suffragette movement in Wales and one of the founders of the Cardiff branch, four years after her appointment as Professor (1908). The first branch in Wales of the movement to win the vote for women was founded in Llandudno in 1907. This was followed by branches in Rhyl and Cardiff (1908); and Anglesey and Bangor (1912).

In the 1918 General Election women were nominated as Parliamentary candidates for the first time. There were seventeen women candidates in Britain, but only one stood for a Welsh constituency, namely Prof. Mackenzie (Labour) for the University of Wales seat. She was unsuccessful.

Progress on women’s votes was slow. Enfranchised women over the age of thirty, provided they were local government electors, or the wives of local government electors, was awarded the vote 14 years after her appointment as professor (1918), three year after she had retired from her academic duties (1915). Women over 21 years old were granted the right to vote 24 years after her appointment (1928), 14 years before her death.
Having made a significant contribution in her work to Education; women in University life and the movement for equal voting rights, Professor Mackenzie died in Brockweir, near Chepstow on 10 December 1942.