Cardiff’s been long overdue a reasonable indoor skate park for a while. And now we have one! Writer Jodie Ashdown headed along to see Spit and Sawdust at their opening party. Read on for what she found! 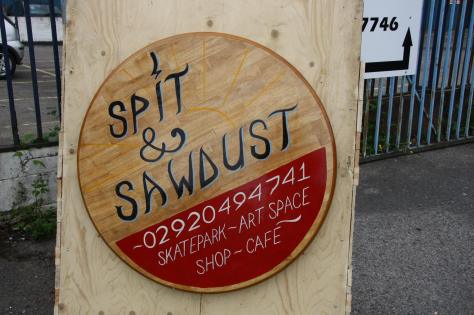 Skateboarding, along with many other extreme sports, has undergone a boom in the last few years and now seems to be more popular than ever. Cardiff Council has responded to this by putting up bars along statue plinths and other grindable areas in the city centre in an effort to deter the skaters, who they say damage the benches and architecture.

But, luckily for the skaters, in-liners, skateboarders, scooter riders and BMXers of Cardiff, a cunning idea was in the process of fruition. Cardiff locals Christian and Nia decided to not only provide a space for the skaters, but also create an art and exhibition space, a skate shop and a cafe. 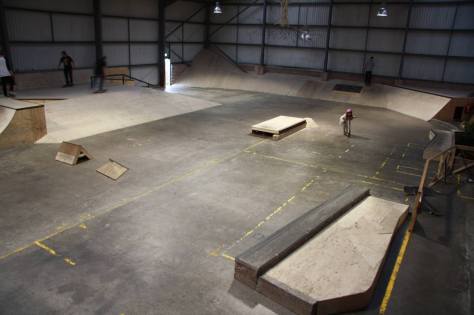 We headed down to the skate park (behind Greggs on Newport Road) for their official ‘Warehouse Warming Party’ on 31st of May. There was live music, an ice cream vodka bar, food, skating, scootering, biking, flying skateboarders, flying skaters, a sound space, a minidrome (world’s smallest veldrome) and a good crowd of people. The business has been open now for just over a month and seems to be doing well.

And the project was not a short one, the skate park and creative community space was 2 years in the making and was helped by a grant from Sport Wales. Set up by skaters, for skaters, with the community in mind, they worked with the skate scene to create a park which would be suitable for all.

It’d be easy to feel a little intimidated, especially if you’re a novice, but the park has a friendly and relaxed atmosphere and caters to customers of all ages (bearing in mind if you’re twelve or under, you have to wear pads and a helmet). It also has a discipline rota which, say, splits up the BMXers from the in-liners, meaning that the park is as safe and accommodating as it can be, while allowing for progression and improvement. 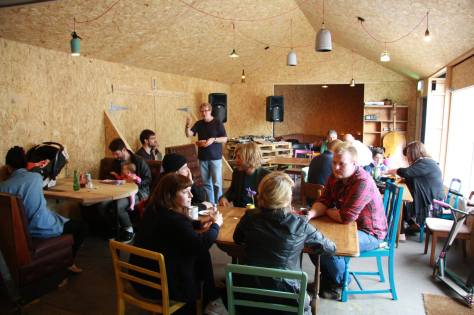 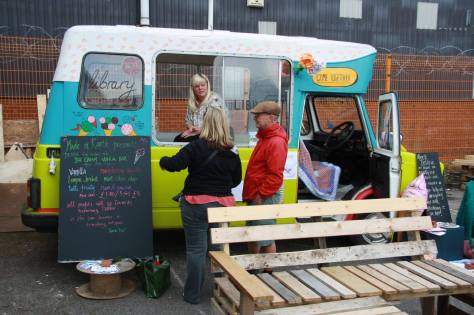 The cafe is not what you’d expect either – the food is all homemade and as organic as possible and includes burgers, salads and cakes. No tuck shop crap here. And there’s even more than that going on – music video filming, live music, video premieres, rare trader conventions are all coming in the near future, and the guys at City Surf have a permanent mini shop set up down there.

It’s obvious that Christian and Nia of Spit and Sawdust are keen for the space to be used to its full potential and establish a creative environment which can be enjoyed by all. There’s loads of free parking and a full day skate pass is just £11 with basic membership, which comes at the extortionate price of £1 for life. Pad, helmet and skateboard hire is available. There’s more information, such as a times and prices, on their website: http://spitandsawdust.co.uk/ and their Spit and Sawdust Facebook page.