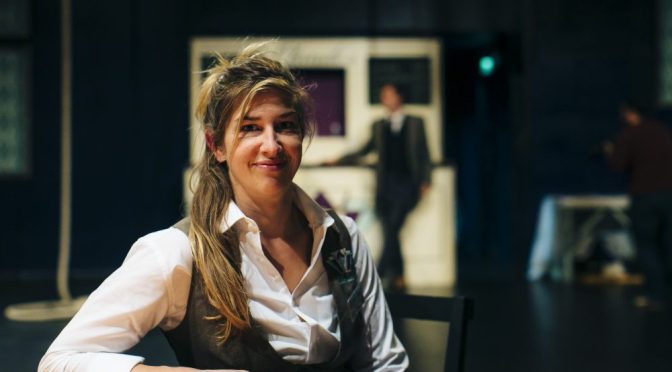 Today, We Are Cardiff gets hula hooping and aerial gymnastic-ing with Anna Sandreuter, founder of the Crashmat Collective performance company.

In 2002 I had just finished Circus School in London (where I had moved from Austria to study) and there was a job add in the Stage to go on tour with Big Fun Circus, so I came to Cardiff and had an interview in a studio on Kings Road. Two weeks later I had bought a van and given up my room in London. That same year I got involved with NoFit State Circus, who had set up their tent in Bute Park and were creating a big show called ImMortal…

For years I was based here, but constantly touring and didn’t really feel as though I was spending that much time here. In between tours I would go off to Barcelona or India or Australia. I worked on ships for a while in the Caribbean, but in 2010 I started thinking it was time to create my own company, so I started two somehow- Crashmat Collective and Mary Bijou Cabaret and Social Club.

I am a circus performer, trainer and director. I made my passion into my profession. I am currently directing a show called Façade, with my company Crashmat Collective, we are in rehearsals for our upcoming tour of Wales and London. It is a theatrical circus show, during which the audience get served a three course meal by the performers, who’s characters are all waiters in a restaurant. It’s a really fun show to do. I also founded the Mary Bijou Cabaret and Social Club. I am lucky to have had great support from many arts organisations to make these things happen.

Other hobbies include going to live music gigs, shows, I love travel, going places in my camper van or further afield. I love coffee, dancing and yoga. I like markets and charity shops. I like sewing. I’m not great at relaxing, but at home I have a nice cup of tea with honey to relax. I never really watch television, but occasionally I choose something on i player. I generally read before sleep, that’s the thing that switches me off from everything else.

I have a love-hate relationship with Cardiff sometimes, but there are many things in Cardiff that I love … mostly they are the independent art and food things that go on … Sunday mornings at Riverside market, Barkers Coffee, the Penylan Pantry, the parks, Chapter, Milgi, Pipes beer fests, pop up kitchens … many are run by friends and go hand in hand with arty happenings, they are the things I like supporting … Spillers records, Dirty Protest, live music gigs, Gwdihw, Printhouse, Green City, Waterloo tea, theatre gigs.

On a rainy day I think the Arcades in Cardiff are special, architecturally and historically, and they are fun to explore.

Anna Sandreuter studied at The Circus Space, London. Before founding her own company Crashmat Collective and the Mary Bijou Cabaret & Social Club, she toured with Nofit State Circus for three years in the internationally acclaimed performance of ImMortal. Anna performed on tour with NoFit State Circus Parklife, co-production with National Theatre Wales Mundo Paralelo (dir. Mladen Materic Tattoo Theatre, France) which performed at London International Mime Festival Jan 2012, Labyrinth a resident show at the Eden Project, Willi Dorners Bodies In Urban Spaces Swansea, Norfolk and Norwich Festivals own Spiegeltent show Les Enfant Perdus. She also featured in the film “Y Syrcas” (dir. Kevin Allen) on S4C this Christmas. Since 2002 she has worked as a freelance circus coach and has taught hundreds of circus classes at NoFit State Circus and around the world. Anna specialises in vertical rope and hula hoop and loves a nice cappuccino.

Anna was photographed at rehearsal by Joseph Singh (SnapPopAndRock)