Katie Hamer continues her A–Z series for Cardiff with a look at all things vintage. Here’s what she found… 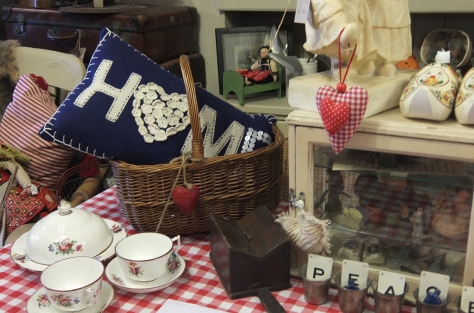 Has Cardiff become an identikit city in the last two decades?

Far from it, I discovered, as I set out to explore the less commercialised quarters. While it’s true that the capital has it’s fair share of chain stores and big brands, I didn’t have to delve very deep to uncover its more unique enterprises. In fact, I only had to hop off the train at Cardiff Central and walk under the railway bridge to make my first big discovery…

In an old redbrick building, surrounded by modern office blocks and hotels, is one of Cardiff’s more surprising secrets; three floors of market traders selling everything from bric-a-brac to musical instruments, lighting and furniture to vintage clothing, comics and books to toys. The exterior is a little weatherworn to say the least, but the interior more than compensates with its Aladdin’s Cave of goodies. You may be surprised to know that Jacobs is far from new. In fact it became established 36 years ago and has been in its current location since the 1980’s. 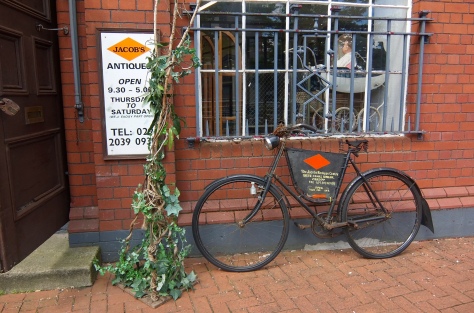 In the decades since the start of the BBC’s Antiques Roadshow, it has been much harder to find a bargain; people are much more savvy these days. However, the price tickets I found, which were clearly displayed, seemed reasonable. I also got the impression just from walking around the various floors, that had I purchased something, I would also have received good old fashioned customer care from traders with many year’s experience of the business. The whole experience of shopping here felt as reassuring as indulging in your Gran’s apple crumble.

On entering the building, I became aware that this would be an experience like no other. I immediately reached for my camera, hoping to take as many photos of the place as I could, but I thought I should check the protocol first. So I approached one of the market traders on the ground floor who told me that would be no problem, had I visited before? I told her I hadn’t. She informed me that the best way to get a feel for the building is to start at the roof garden at the top and then work my way down. 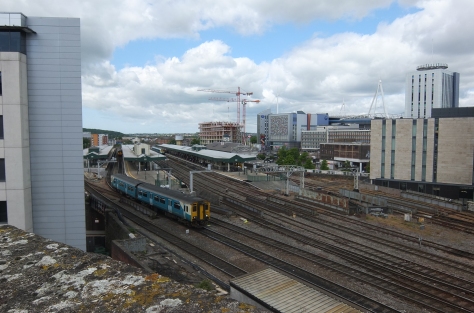 Well, I hadn’t been aware of a roof garden from my research so I decided to follow her advice and go straight there. I’m glad I did, because I’d never experienced a roof top view of Cardiff before and the views are spectacular, especially of the railway station. There’s also a little conservatory where you’re invited to have your coffee and cake, purchased from the café, and relax whilst reading a magazine or a book. On occasion, they also have a roof top cinema for which tickets can be purchased on their website but be warned, as seating is very limited. 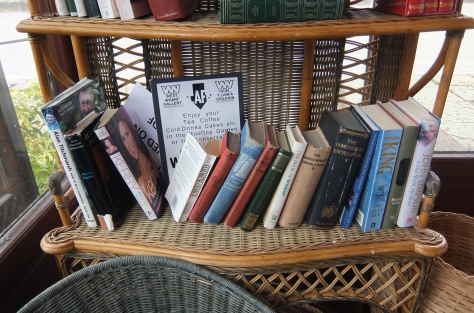 On making my way back down, I discovered the West Wharf Gallery on the top floor, which proclaims itself: ‘the home of contemporary art in Cardiff’ and ‘A contemporary art gallery which features both well established and emerging artists [with] a convenient city centre location and its friendly unique atmosphere, the gallery is Cardiff’s best kept secret. On my visit they were setting up exhibitions so I didn’t take any photos but I’m tempted to go back and explore again soon. 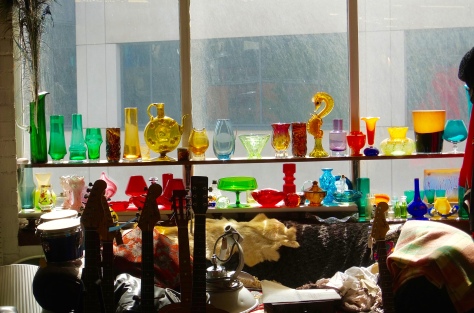 Next, I explored all three floors of the antiques markets. I found much to fascinate me, especially old slate mantel clocks, vintage Oxo tins, and memorabilia from the movies. I think I even discovered a plastic E.T. from the movie of the same name, but my memory may be playing tricks on me. Most memorable for me was a wall of colourful glass ornaments with a sofa and a row of electric guitars lined up in front of it. Most baffling for me were the vintage wedding dresses they had displayed in every stairwell. I’d certainly like to know the thinking behind this…

My overall impression was of a place where different eras converge in a way that is both eclectic and inspiring. Seeing people’s possessions from the thirties or earlier made me dream of what it would have been like to be young in those times, to have gramophone records etc as the latest new gadget instead of a symbol of a bygone era. A place like this really brings out the nostalgia bug in me and I know I’ll have to visit if only to experience it once again…

You can find further information on Jacobs here:

Facebook where you can also check their opening hours (They open Thursday to Saturday). 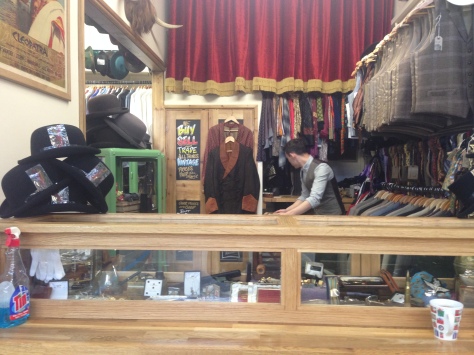 A much newer addition on the Cardiff Vintage trail is Hatt’s. Situated on Cardiff market, and run by a father and son combo, they are a true vintage men’s outfitters. I only stopped for a few minutes, but that’s all it took for me to be wowed by their sense of theatre. They provide a bespoke tailoring service as well as well as inviting members of the public to trade their vintage garments with them. They’re very attentive to their customers and all their reviews suggest that their service is second to none. I was surprised to hear that they had only become established two years ago as they have the confidence and the skills to suggest that they could have been around their forever. 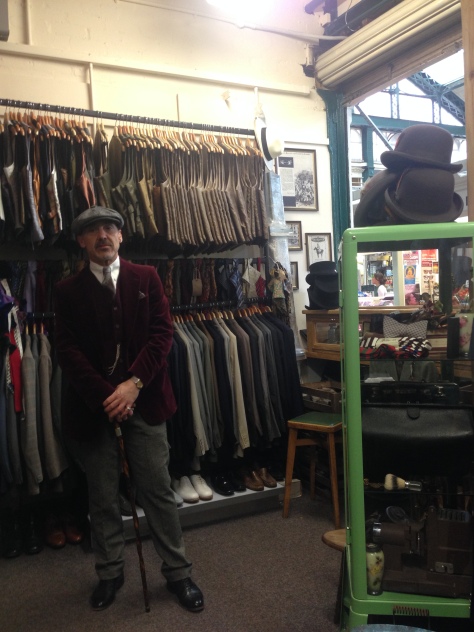 You can find more information on Hatt’s here:

With its rainbow skein of colours, this simply has to be the most colourful vintage shops around. It would be easy to be put off by the loud designs but after a few minutes of wandering around you soon aclimatise. There are fashions here from the sixties, seventies and eighties and, if I’m honest, the styles weren’t to my taste. Even so, I couldn’t help but be amazed by their range of vintage denim, tie-dyed t-shirts and retro bags. They provide a relaxed environment in which you are free to try things on, with or without assistance. What amused and baffled me upon visiting was that they appeared to have adapted a shower enclosure as a changing room, which I guess is, at least, a very imaginative and creative use of limited space. 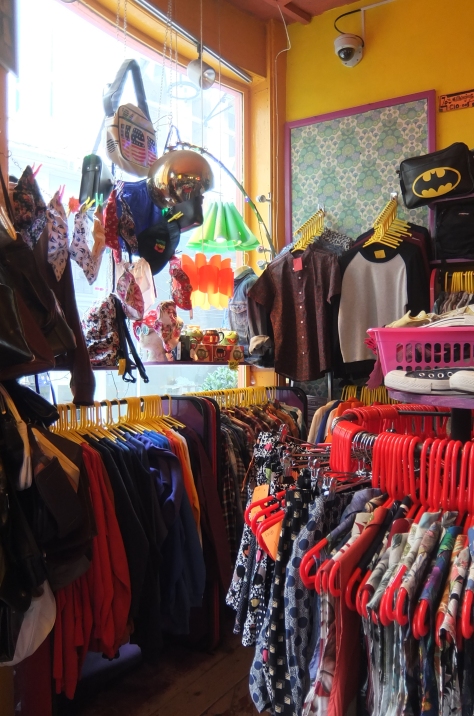 You can find more information on Hobo’s here:

I hope you enjoy my photo gallery: 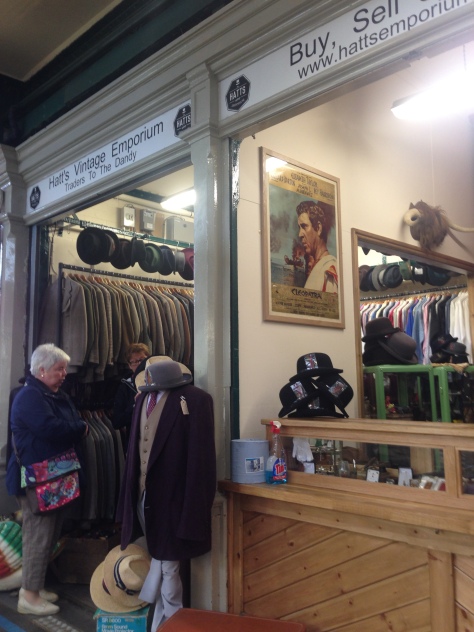 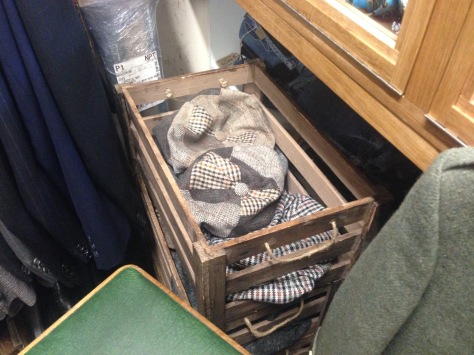 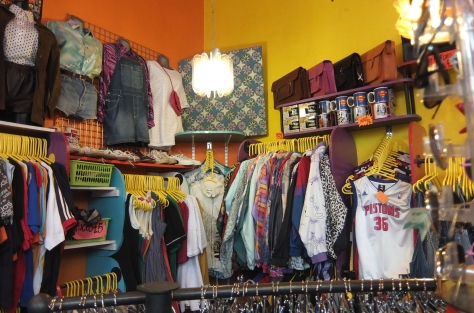 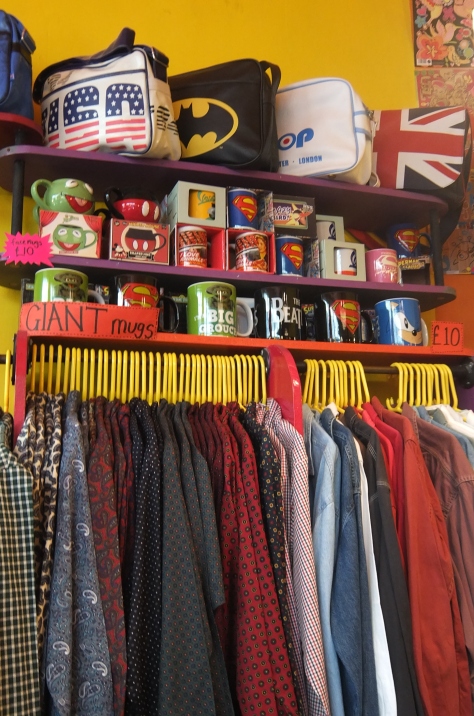 5 thoughts on “Cardiff A–Z V is for Vintage: Part One”