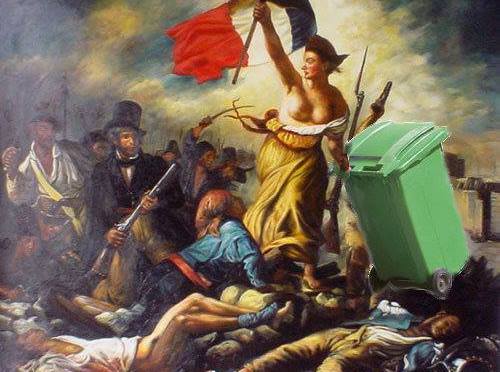 The #bingate controversy raged on this week with the council beginning its new waste collection regime. Here, a Canton resident sets out why we should be worried about how decisions are made in our area – bins are just the beginning….

Residents across the city lined up their wheelie bins this week as the council’s new waste management strategy lurched into action. Apart from a few dissenters, most played by the new rules, but you’d have to be living in your bin to have missed the controversy surrounding #bingate.

I’ll come out right now as an anti-binner. In my street we don’t have too much of an issue with litter, and recycling levels are high. Our main concern is that we don’t really have anywhere to store our brand new wheelie bins. Contrary to what some media commentators (and apparently some of our own elected councillors) seem to think, we know this is a first world problem. And for those shouting NIMBY: having respect and concern for your own home isn’t unreasonable, as long as a healthy sense of perspective is maintained.

Of much higher importance than my front doorstep are the other responsibilities our elected officials have for this city. These are the people in charge of our schools; the welfare services my elderly neighbours rely on; our parks, leisure centres and libraries, not to mention our transport infrastructure and the job of presenting Cardiff to the world.

Many bin-gate residents are more concerned that the council has demonstrated a lack of consultation, transparency and communication over these changes and that this shouldn’t go unchecked, because their next decision might be about something genuinely life-changing. We’re more annoyed at the process than the outcome. We can live with bins, but we’re still not sure why we have to.

I found two published surveys on waste management, here and here, which report the high level of commitment to increasing recycling across Cardiff. How have these same residents reacted with such vitriol to the new recycling scheme?

Well, for one the new bins cost almost £2m. Trust us, say the council – we must spend now to avoid huge fines in future. But how many houses with little or no garden waste received a 240-litre bin last week, entirely surplus to requirement? How many of these are being returned, requiring special collection services at further cost? Some areas have been given bins where bags were working fine. Some who desperately want bins are still on bags. Who made these decisions and how? These are reasonable questions to ask given the council’s public commitment to transparency. A one-size fits all approach has been imposed on the city with little concern for local circumstances.

For those mocking the concerned residents of Canton: surely engagement in the democratic process is a good thing? It’s easy to play top trumps with worthy causes. Worried about wheelie bins; what about education? Concerned about austerity measures; there are people in the world dying from lack of fresh water. This undermines the role of the citizen in our democracy. If bin-gate is the issue that kick-starts more public engagement in how our city is run, then some good can come of the saga.

Did you know that there is a public survey live on Ask Cardiff right now? Closing date is 7th September. Officials did attempt to consult through surveys, events, social media and articles in the County Times. Despite this effort most residents didn’t feel consulted until well after the decision was made. Surely a communications rethink is needed?

In the spirit of community, how can Cardiff get past bin-gate? It’s clear that we need to think radically about recycling and waste management, and it’s also clear that the council isn’t providing innovative leadership. I’m horrified by some of the pictures I’ve seen on twitter – communities continually harassed by tidal waves of litter due to seagulls, fly tipping or common lack of courtesy from litter-louts. That’s not something any resident should have to put up with, but judging from today’s pictures, wheelie bins aren’t going to be the magic solution.

So what can communities do to tackle the problems caused by waste, and what support do we need from our elected officials?

Have your say in the comments section!