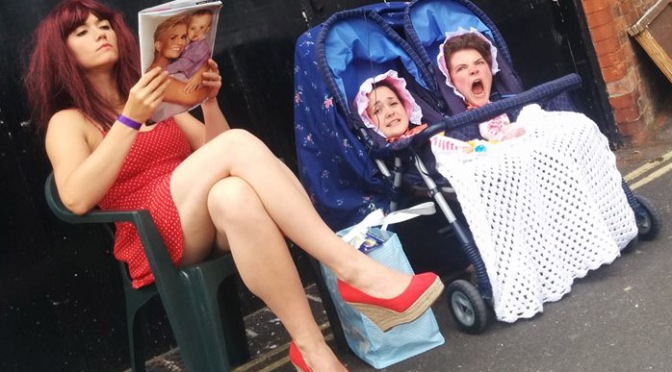 Ooooo an exciting new performance company! Bad Egg Theatre tells us about their campaign for a new pram so they can perform their hilarious material at Glastonbury!

We are Olga Kaleta, Rosy Roberts and Maddy Lennox. Together we are The Bad Egg Theatre Company, an emerging company specialising in street theatre. As a company we were brought together by a shared desire to create work focused on current issues. Using a unique blend of physical and verbal comedy, our ambition is to create highly entertaining, multi dimensional work that makes the audience think & question. We’re developing an outdoor street show that will be performed at arts festivals, community events, parades & fairs.

The Sprats are a wicked take on the limits of our responsibility and knowledge. The twin babies contemplate. They debate. They discuss political apathy and the wealth divides. They also cry a lot and poop. They want to entertain you, but they’re on the edge. Kind of like Robbie Williams, but much more naughty and a little bit less famous.

… we have spent two weeks devising and have showcased the project in Somerset. We’ve developed a prototype pram with support from Take Art. But our main issue is that our pram doesn’t move… This limits us in both a practical and artistic sense. Therefore we’re currently crowd funding for a new pram that will be motorized, all-terrain and easily maneuverable (in collaboration with former Scrapheap Challenge winner- Paul McGarry).

We are scheduled to premier the new version of The Sprats at Glastonbury Festival 2016!!

We really believe in this project. In addition to being highly entertaining and visually striking, it also creates a platform to speak about uneasy social and political issues. Children are the ultimate buffoons. Unconfined by social sensitivity, they can say the unspeakable and get away with it.

Here are some lovely things that people said about “The Sprats”:

“Startling and very funny- made some sharp observations too. Great script and acting. As good as any sketch I’ve seen on TV.”

“Up to date comedy- appropriate for all ages…”

We launched our Kickstarter campaign on the 4th of April. The project will only be funded if we reach our target by the 4th of May 2016. You can support by donating here: https://www.kickstarter.com/projects/1495800494/the-sprats?ref=discovery.
You can also help us by sharing our campaign with your communities.