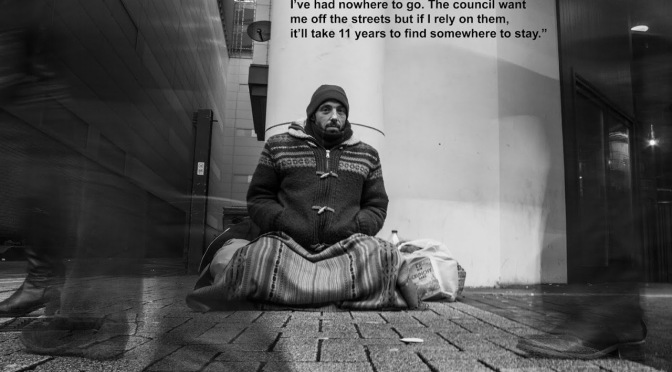 Photojournalist Ben Blyth spent a night sleeping rough, speaking to street homeless people in Cardiff to hear their stories and to find out how they would like to be treated by the public.

Ben talks to us about the process of putting the film. First, if you haven’t seen it …

Here’s what Ben had to say about putting the film together:
“My interest in homelessness has been one that started back in 2014, when I started a project photographing Cardiff’s homeless and attaching quotes to the images from the people in them. However, after another year of studying since, I have realised that I didn’t even touch the tip of the iceberg. So when I was given the opportunity to create a film for one of my final year assignments, I felt that this was the chance to revisit the subject and try to cover it in a way that offers a fairer view on homelessness in Cardiff.
“I began creating this film in October, and had decided that to not go into the subject completely blind so spent two days and a night sleeping rough and begging on the streets of Cardiff. I had originally planned to spend two nights sleeping rough, but to be quite honest, at the time I couldn’t bring myself to do another night. This is partly down to being woken up multiple times in the night by drunk people and then in the early hours, the police woke me to see what was going on. This however was a minor part of the experience, I felt completely lost in a city that I had lived in for two years, a feeling that is very hard to explain, but when there is literally nothing to do or no where to go, its a very confusing feeling. During this experience, I realised very quickly that I would never have any idea of what it’s like to be homeless unless it actually happened to me, this is when I started to talk to homeless people in the city, firstly without a camera, just chatting to them and seeing what they thought of the idea of a film. Most liked the idea, and with that I began filming.
“The main aim of the film was to let the people on the street respond directly to comments often seen online directed at homeless people. These came to my attention even more after my experiment and really angered me, especially when most homeless people don’t have the chance to respond for themselves. The outcome of this is the film, A Little Change, Please. The message I received from most of the people I spoke to on the streets was that, they would much prefer someone to sit and talk to them for a few minutes than have a little bit of change thrown at them. Yes, the money and food is important, but what is more important is that they are made to feel like people, this can be so much more important than a couple of coins. From the response so far it seems to have changed quite a few opinions, and I feel this is important. No one individual can stop homelessness, but if everyone makes a little change to the way they see them or treat them then the bigger change has more of a chance of happening.”
Ben has done some other photography for us too:

One thought on “A little change, please: a film about homelessness in Cardiff”