A few weeks ago, I came across some old pics of the Olympia (then the ABC) cinema at Andrews Buildings (today it’s where River Island is on Queen Street). I’ve got fond if sketchy memories of that cinema (most notably seeing The Jungle Book and Jurassic Park in there as a child), and had almost completely forgotten where the building was on Queen Street. 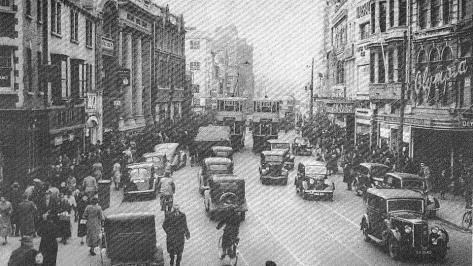 The original facade is still there, although the auditorium was demolished in 2003.

(compare and contrast – 1954 to today. Photos from Cardiff History Tumblr)

The Andrews Buildings on Queen Street were originally built in 1899 by Solomon Andrews (you’ll probably know him better for being the driving force behind Cardiff’s Indoor Market). The place was a leisure and retail centre that was home to Andrews Hall, a concert hall that was converted into a theatre: first the Olympia, then ABC. The cinema finally closed its doors in 1999.

There’s also this rather charming video shot in the projection room in 1998, a year before the cinema finally closed.

Was anyone else at that screening of Jurassic Park? Ah, good times.