There are some avid runners amongst the We Are Cardiff volunteers, so we are delighted to welcome Gwydion Griffiths on to the blog this week. He ran the Athens Half Marathon, and while he might not be sure why he did it, he’s helped raise thousands for Velindre.

The day of the race had come. I had arrived to run the Athens half marathon and I was nervous, excited and apprehensive. I’d never run a half marathon before. Then the questions started. What if I don’t finish? What if I finish last? Does eating too many bananas give you the runs? I got to the starting point, regretting my decision to sign up for this. Looking around, everyone was lean, toned and fit. I was gutted; fortyish, fatish, unfit. I toyed with the idea of taking a few photos of myself with them, spending the morning at McDonald’s, and then picking up my medal after a few hours.

Why had I thought it would be a good idea??

I’ve been raising money for Velindre for years now. Cancer will affect one in two people born after 1960, and that’s sobering statistic. My relationship with Velindre stretches back decades. Just under thirty years ago, when I was studying for my GCSEs, my father was diagnosed with cancer.  Although a little too young at the time to fully understand the implications, I remember being devastated.  However, he received superb care from Velindre and lived to see me, and my siblings, Angharad and Iestyn, pass our exams, go to university and get good(ish) jobs. The cancer returned 12 years later, and this time he lost the fight.

It was a gut wrenching blow to our family, and our mother would be alone in north Wales. She’d made some good friends up there and we visited as often as possible, but she had lost her husband and we had lost our father. Then, three years ago, our mother was diagnosed with cancer. It was another crushing blow. We arranged for her to move to Cardiff to be near her children and receive fantastic care and treatment at Velindre and Marie Curie. She lived to enjoy a nice holiday in Italy, a country that she loved, with me, and spent some quality time with her young grandchildren.

And then 2017 happened. My wife was made redundant in February, my mother passed away in May, after her cancer returned, and then my mother-in-law passed away in August after being diagnosed with cancer. It was a horrible year for us.

Out of adversity, I wanted some good to come, and that’s why I set my Velindre fundraising and running challenge. So, maybe that’s why I ran the Athens Half Marathon – to remember my parents and raise some money for a fantastic cause.

Last summer, I had joined Canton Chargers and Skills running club, who run from Café Castan on Monday nights. Their advice, training and support proved inspirational. I’d also made a new friend, Andy Kreppel, who, despite being a devout Swansea City supporter, became my running partner. Off we’d go every weekend, running up the Taff Trail towards Castell Coch, or down to Cardiff Bay, enjoying chats about football, rugby, work and how much we hated running. One low point was running from Pontcanna to Penarth, about six miles, when it was chucking it down with rain. I was drenched.

Then came the heavy snow. I was miles behind on my training and needed to run. ‘It’s clearing up Andy. Do you fancy it?’ ’No’. He’d cried off like a big baby. So, off I went by myself, running through the snow like Sylvester Stallone about to take on Dolph Lundgren in Rocky IV, but a much less lean and ripped version. The training was done and I was ready. Of course, a special mention must be given to my wonderful wife who gave me time to go out training and her heartfelt words of encouragement. ‘I bet you feel all pious now, running around Cardiff like you’re bloody Mo Farah’ was a particular favourite.

But running around Cardiff isn’t quite the same as doing a half marathon race in Athens. And that was where I found myself, at the front of the race, surrounded by super fit looking athletes. I did what any sensible first-time half marathon runner would do: I went to the back, where I hoped all the slowest people would be. The headphones went in and I started listening to Elvis Presley’s Suspicious Minds, Live in Las Vegas. This would put me in the right mood; upbeat, with a fast tempo. I started feeling a little bit better.

Then the tap on the shoulder came. I was busted. I turned around and a very nice Greek racing steward pointed me in a different direction. ‘I think you are in the wrong place. Your number is blue and you need to be with them’. I don’t speak any Greek and assumed that something had been lost in translation on my registration form. I was placed at the front with people who looked to me like elite athletes. I tried to think of something to comfort myself with. I failed to find anything.

To my left, a man had his ankle on top of a metre-high barrier, stretching. I thought, if I did that I’m going to do some serious damage to my groin. I looked to my right. Another man was wearing what can only be described as a hunting vest. However, instead of bullets and cartridges, he had drinks, gels and sun cream in each compartment. He also had that tape on his legs that is supposed to be good for your muscles. All the gear! I had rocked up in Cardiff Blues shorts, a Velindre t-shirt and my old trainers. And then the race started.

As we passed the starting line, I remember thinking to myself, ‘only another 13 more miles to go’. Within the first mile, I was overtaken by hundreds, if not thousands, of runners. I didn’t mind. I hadn’t set my Strava App deliberately. I didn’t want to know how slow I was going—it’s not a sprint, it’s a half marathon, was my motto.

Then, at about two miles, the noise! There were huge speakers blaring out techno music. Bang. Bang. Bang. If I was in a nightclub it would have been amazing. But I wasn’t. I was running 13 miles around the Greek capital city, and I needed to focus. Then, at about four miles, the African drums came, spurring me on. Boom, boom, boom to the beat of my feet; every stride taking me closer to my goal.

I plodded around for what seemed like ages, and then I saw it, like an oasis in the distance. The finishing line. Off I went, foot down on the gas. Give it my all; don’t save anything for the swim back. I saw the clock — I’d smashed it. About 60 minutes off my target time. I’d nailed it! Unbelievable. And it was. ‘Bravissimo, bravissimo, one more lap to go’ shouted the nice Greek racing steward as I approached.

I was gutted. I was halfway. So, off I went again. ‘Tough times don’t last but tough people do,’ ‘If you’re going through hell, keep going’ and other such clichés raced through my head.

Round the corner, up the hill, down the hill, up another hill, down another hill. Bang, bang, bang Dalek music. Boom, boom, boom African drums. Past the collapsed Corinthian columns of the ancient temple and the old Olympic stadium.  Then, with a mile to go, in went the headphones again. Big Black – Kerosene. Nothing like some classic ‘80s Californian Anarcho punk to drive me to the finishing line.

I did it. I’d completed my first half marathon, in Athens, the birthplace of politics, philosophy, democracy and drama. The birthplace of the Olympics. A city I’d always wanted to visit since seeing photos of the Acropolis as a child.  The race itself took just under three hours (it was hilly) but the journey and all the training had taken about nine months.

None of this would have been possible without the support of the incredible Andrew Morris and Kylie McKee, and the amazing team at Velindre Cancer Research based in Cardiff. A charity that does fantastic work and is close to my heart.

About two years ago, I came up with a simple idea that I hoped would raise thousands of pounds for Velindre. Like most good ideas, it was born in a pub. I’d gone to watch Cardiff Blues record another rousing victory at the Arms Park and went for a few beers with two mates afterwards. I explained to James and Illtud that there were about 660,000 schoolchildren in Wales. If I could get them all to wear red and donate £1, that would raise a lot of money. They thought I was nuts. Undaunted, I ploughed on. I’d worked out that if 10 per cent of the schools took part, that would raise £66,000 and one per cent would raise £6,600. And thus, Wear Red for Wales and Velindre was born.

I trialled it during the glorious Euro 2016, asking 13 friends if their kids’ schools would ‘Wear Red for Wales and Velindre’ when Wales took on England on that sunny Thursday afternoon. All the schools agreed and we raised £3,500. Then I took the idea to Velindre. They liked it, and in 2017, through Velindre’s hard work, about 80 schools and companies took part and raised £20,000.

In 2018, on the eve of the first Six Nation match, Velindre had received 344 registration forms: 185 from schools, 139 from companies and organisations such as the Welsh Government, and 20 from individuals. They all took part in Wear Red for Wales and Velindre 2018. Each person had donated £1 – and we just heard the total amount raised is now in excess of £100,000! 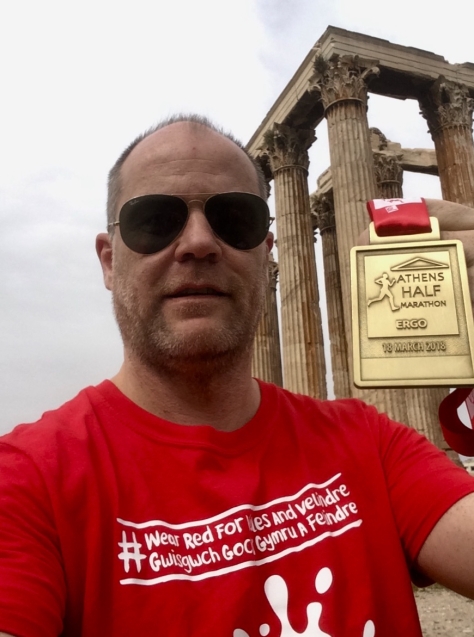 Next year’s date for Wear Red for Wales and Velindre has been set for Friday 1st of February 2019, when Wales open the Six Nations, taking on France in Paris. It’s easy to take part, just get your work, school, university, club, gym class, pub, choir, or whatever, to Wear Red and donate £1 per person. You make the difference. Please donate at Velindre’s website.

Gwydion Griffiths, lives in Pontcanna, Cardiff with his wife, eight-year-old daughter and two cats. Having previously worked for S4C and Cardiff Blues, he now works in Business Marketing for the Welsh Government. A season ticket holder at Glamorgan Cricket, Cardiff Blues and Wales football he can be spotted plodding around Llandaff Fields and is thinking of participating in another fundraising race.