There’s a beautiful synchronicity at work in the universe sometimes, as evidenced by this – our first ever instalment of the Letters from Cardiff in lockdown series, written by the wonderful Neil Cocker who also wrote the first ever story that we EVER published here on We Are Cardiff, nearly ten years ago. Neil has spent a lot of the time since then travelling around and living in other countries, but has ended up back here in the lockdown. All roads lead back to Cardiff! Big love to Neil and thanks for this – the first post in our new series, examining how you’re all managing through the lockdown. We’re looking for your stories, so please contribute to Letters from Cardiff in lockdown!

At the beginning of 2016 I left Cardiff, “temporarily” moving to London to work on a three month project. I didn’t know then that I wouldn’t return properly to my adopted home for nearly three years, and would live at the very far side of Europe for two of those.

Just over a year on from my return, I find myself living right in the city centre. Not my first choice of location in a city that offers so many options to those looking for a suburb that feels like home. But a result of circumstance, luck, and others’ generosity for a wanderer who hasn’t quite settled again yet.

On returning, my relationship with the city changed, and continues to change, as I’m now able to compare it fairly with other European capitals. But also I’m now able to see the city centre “as it is”, without shoppers, tourists, coffee shop flâneurs. The lockdown has dissolved the flesh, tendons, arteries and organs. All that’s left are the bones; the empty streets, closed shops, and those that call the centre “home”. And among those bones two things have become very apparent to me.

Firstly, one of the things that struck me hardest when I returned in late 2018 was the extent to which homelessness was now an un-ignorable facet of the city centre. Now, with the streets so quiet, I can see the homeless community much more clearly. But I can also hear them.

When I first left Cardiff I felt that the situation, while bad, was one that was easy to pretend didn’t exist. You could see a huddled figure in a doorway, and hope your headphones were prominent enough that you could pretend not to hear any requests for money. Now, after what appears to be a sharp rise in homelessness, I’m not just ashamed of my own ignorance. I’m also ashamed at just how much, as a society, we were failing the people that needed our help the most.

Living in the very heart of Wales’ capital is an odd experience during lockdown. It’s quiet for the first time in the 12 months I’ve been in this apartment. I don’t just mean that there are very few people in the streets during the daytime, but that I don’t get woken at 3am by drunkards shouting, as people stagger up The Hayes to their homes and hotels. I also don’t have to keep my windows closed on sunny days just to take the edge off the volume of a busker playing the same six songs on repeat. Now it’s very, very quiet – just me, my open windows and the sound of seagulls occasionally fighting over the dwindling scraps of food, or having noisy, hasty, bird sex.

Now the view from street level of #Cardiff. 10.30pm. What's interesting is that despite the city centre being almost entirely deserted, most of the night time economy is still open for business. Bars, restaurant, Chippy Alley…. Even strip clubs. All basically empty, presumably. pic.twitter.com/xPSL1MiJOW

Pretty much the only human voices I hear now are those of the homeless. Their voices are no longer drowned out by the hubbub of a thousand shoppers, so they’re louder and more evident. No longer the inconvenient, marginalised 0.1%, they make up a much bigger proportion of the people who are on the streets of the centre. They can’t be ignored, as they may be literally the only person on the street at the same time as you. Whether we will step up to help them in the long term after this pandemic ends remains to be seen.

The other noticeable thing about the city centre is that, despite the increasing number of  large blocks of flats, there appears to be little in the way of “community”. Or, not that I’m aware of, at least. In my apartment complex alone there are over 300 flats, although I suspect that occupancy is nowhere near 100%. Yet, I’ve never heard of one single communal activity. Apart from a few familiar faces with whom I’m on nodding terms, I have almost zero interactions in this building. And this saddens me.

Mournful jazz saxophone echoes around The Hayes in #Cardiff.#lockdownuk pic.twitter.com/GDeSU0Nftt

Maybe it’s the lack of “need” around which a community can coalesce, because we all live in the very heart of the action. I remember back in my dim and distant past, that those who lived in the student halls at Senghennydd Court complained of a lack of community there. They lived a short stumble from both the city centre, and the Students Union, so they didn’t “need” to create a community. Those of us consigned to Llys Tal-y-bont (a much smaller development back in the mid nineties) had to make our own entertainment, as we’ve all heard our grandparents say. We had to form friendships and bonds late at night in others’ apartments, because we couldn’t just go to the Pen & Wig to meet friends. We were, we felt, many miles from the action. And that was what created a need.

As we’ve seen during this pandemic, many communities have stepped up to fill the gap of their regular interactions at their local Coffee No.1 by creating a Whatsapp group for their street, or putting flyers through doors offering food shopping for those in quarantine. Humans seem to create community when there isn’t one. But not here, it feels. Maybe because there’s no central point, value, or identity around which to gather. Especially when everything is closed, and all the suburb dwellers aren’t here, too. Regardless, if city centre living is to continue growing at the same pace, we need to find ways to provide people who live together to get to know each other in an easy, unforced way. How will we facilitate interactions outside of awkwardly acknowledging each other while waiting for the lifts? Architects and city planners call these “third spaces” or “bump spaces”. Spots where you can meet people outside of home or work and, hopefully perhaps, get to know people that you wouldn’t normally meet.

Where are the spaces in a city centre where we can dwell, outside of the cafes that we use to have preplanned meetings? More importantly, why aren’t the buildings in which us city centre dwellers better at making it easier for us to meet, and learn about, our neighbours? There’s no doubt that the lockdown has made us all consider our lives in different ways and examine the things that are important. I just hope that the cities that we build in the future reflect and embody these changing priorities. For those that sleep next door, and for those that sleep in doorways – community is everything. 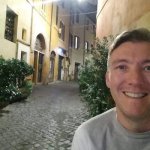 Follow Neil on Twitter @NeilCocker. He’s recently set up his own newsletter about community, the science of happiness and wellbeing, a (secular) retreat he’s going to be running, and how we build a happier, better world. Sign up to Neil’s newsletter.

You can help Cardiff’s homeless and vulnerable by donating to some of the following organisations:

2 thoughts on “Letters from Cardiff in lockdown: Neil Cocker”