My favourite lockdown activities include: clapping for key workers, swapping books with my friends, colouring the inside of a large cardboard box while sitting in it, yoga (I have invented extra poses, such as ‘fish’ and ‘snake’) and pretending to be a dinosaur. I would recommend all of them.

I ask most days if we can ‘do clapping’. But it turns out that’s only on Thursday nights. I like to see everyone outside clapping. It also means I get to wave to my friend, Jeremy, across the road, who, like me, is also in his pyjamas and sleeping bag by 8pm. When the clapping stops, I am known to shout “More clapping!” And sometimes that works.

It has been nice having Daddy at home. He’s normally at the university but he has been giving lectures to his students from the spare room. I have made the most of him being at home by waiting until I am outside his door to belt out Baby Shark, doo doo doo doo doo doo. I also once gave him a fright by running up the stairs and into his office while he was in a Zoom meeting and saying “What you up to?” (In case you were wondering, Mummy was just trying to wash her hands during all of this; they don’t call me Speedy GonzAlice for nothing.) 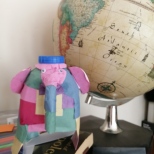 Mummy says our house now looks like we should be on an episode of Hoarders, whatever that is. It’s true that we have a lot more cardboard than we used to: a cardboard house, a cardboard boat, a cardboard TV and a cardboard under-the-sea scene. I also made an Elmer the Elephant using an old milk carton and some colourful paper squares. I say ‘made’, I mean project managed.

It is hard not seeing friends and family, though. I miss them. The other day I was walking past my favourite playground with Mummy and I asked if I could go on the seesaw with my friend Millie, but she said it’s closed now but we will do when we can. So instead we went into the grassy area of the park and I went up to all the trees and hugged them.

I feel a bit wary when I see people I don’t know walking around. I think it’s because Mummy sometimes picks me up or crosses the street if there are people about, and that’s very strange to me. I don’t always know how to react.

Normally I go to lots of different places, but now we have to keep a distance from everyone, even our friends. But we do make each other cards and talk on the phone. One time I said to Millie, “Wash your hands, nice and clean!” and then lay down on the floor and put a toilet roll on my tummy. It was hysterical. I think mummy would call that my peak lockdown moment.

I got upset the other day that I couldn’t go to the supermarket with Daddy. And when we saw an airplane I asked if I could go on it.

I’m lucky that I find beauty in small things. I am interested in all the different kinds of birds. I like spotting helicopters in the sky. Yesterday when I was in the garden, I watched a bee. Then I said “Excuse me, bee” and waited patiently for it to fly away before watering our apple tree.

3 thoughts on “Letters from Cardiff in lockdown: Alice, aged two”