The day we were sent home from work had a strange echo of Christmas. I tied up loose ends, packed my bag and said goodbye to colleagues, not knowing when I’d see them next, or how the world might have changed when I did.

When I got home I called my parents, and then went for a run. It calmed me and helped me get some perspective on the possible personal impact of the unfolding crisis. Running has helped to anchor me during the last  three months: lifting my mood when I’ve been down, and adding satisfaction to days which would otherwise consist of the endless cycle of cooking, eating, working and washing up.

I live in Riverside, and running through Bute Park most days given me the chance to watch Cardiff respond to the pandemic. In early March, before the lockdown began, people were visibly making the most of the park in the cold weather. We had been told to avoid indoor public spaces, and families responded by having unseasonable picnics – wrapped up against the chill wind as though dressed for a ski-trip, in coats, hats and sunglasses. Young men socially-distanced together, drinking wine in camping chairs positioned 2 metres apart along the river.

A week later all non-essential trips outside the house were banned, and the official lockdown began. That evening the park was more sparsely populated, with many runners choosing to wear masks or cover their faces with scarves. The volume of activity that people undertake that goes beyond the essential was evident in the deserted pavements and empty roads.

A new footpath etiquette  quickly emerged, as social distancing stopped being a convention and felt like a survival mechanism. On hearing me approach, couples would fall into single file to give me more room to pass. I ran more and more of my routes through fields and copses of trees. Several days into the lockdown I found it necessary to direct a runner for the first time as he ran towards me. I directed him right, like a traffic policeman – he complied, I gave him the thumbs up and we both smiled. 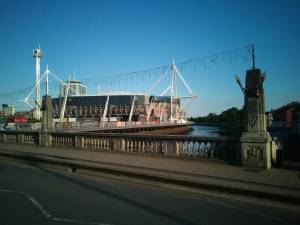 I had hoped that a sense of solidarity would grow between frequent users of the park. But after several failed attempts at friendliness it became clear that the best time to make friends was not whilst sweating and panting during a viral outbreak. Instead of smiling, I began turning away from people as I passed, hiding my face like a bashful debutante.

Spring came with a surreal beauty. Blossom appeared on the branches of trees along the river which, with the low footbridges, made the park look like a Japanese watercolour. Daffodils recovered from their early spring flooding to watch the evening runners with nodding approval. It was hard to reconcile this tranquillity with the rapidly rising death toll.

The background hum of police helicopters reminded me of the world outside the park. I never failed to be surprised by seeing a police horse  – more used to dealing with rugby fans than joggers – trotting along the Taff trail on a bank holiday on the lookout for illicit picnickers.

Running past the football pitches on a drizzly Friday evening I saw what looked like a horse preparing to take a penalty. A mounted policeman in high-viz stood ten metres away from a goal, facing two children with a football. It was a bizarre stand-off, with neither side moving as I ran past, and I wondered what public health benefits there were to stopping two children playing football in a deserted park at dusk.

As my distances increased I started using running as a way to expand my world, which otherwise consisted of my house and the supermarket. As a student I rarely left Cathays and Roath, and as a graduate I’ve rarely gone back. I ran through Cathays to Roath Park Lark and was ambushed by memories, of long-forgotten house parties and meetings that seemed inconsequential at the time but led to some of my deepest friendships.

I ran to the Bay, and past the Senedd, which had changed its name from the “National Assembly for Wales” during the lockdown. The old sign remained, waiting either for two socially distanced workmen, or one with very long arms. I ran over the barrage and was the furthest away from my house I had been in months.

Time became a paradox. Days bled together, but weeks felt as different as foreign countries. Writing down my slowly increasing mileage in a diary helped to create a feeling of continuity. My mileage crept up and I decided to run a half marathon. It felt good to have a project to work towards.

As I added miles to my longest training runs, each run had an exciting feeling of venturing into unknown territory, as I ran the furthest I had for a decade.

I set a date, and felt as nervous beforehand as if I’d been running in an organised event. Buzzing from anxiety and my morning coffee I ran through Grangetown to the Bay. I ran up St Mary’s Street, past boarded pubs, and the Principality Stadium, which is now a – mercifully underused – field hospital.

Running along the Taff, between Blackweir Bridge and Western Avenue, I felt a strange mixture of movement and stasis. I looked up at the trees, meeting above the path like the roof of a church, and was convinced it was them that was moving and not me. I grinned and burst out laughing, giddy with excitement, or perhaps just oxygen debt. Under two later, exhausted and exhilarated, I was back exactly where I’d started. 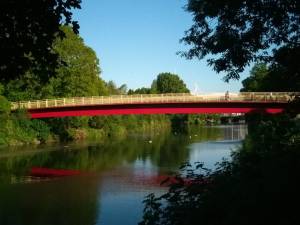 I never want to forget the strangeness of running through the city during a pandemic. Cars have started returning to the residential streets I used to happily run down. The people who sat in camping chairs in their front gardens, waving because we were both human and there was nothing better to do, have gone. I’ll miss it, but I hope I never see it again.

Robin has been raising money with his lockdown marathon, fundraising for Cardiff Foodbanks. Sponsor him!