Photographer and performer Mark Robson has been documenting the life of local circus institution, NoFitState, for the past thirteen years. Now he’s running a Kickstarter to put the book together – and he needs your help to get them printed! Here he is, to explain his project.

I first got involved with Nofit State Circus in 1995 when I blew up 2 cars for the finale of their show Autogeddon. I joined their board in 2002 and started taking photos of the shows shortly after that. I stayed on the board until 2015 and was involved in a variety of ways, including touring with some of the shows. Throughout all that time, and since, I have been taking photos of Nofit State. For several years I had been dreaming of publishing these photos as a book.

In 2015 Ali Williams (one of the founders of Nofit State) announced she was going to move on to new exciting things and leave Nofit State. I decided to make a book for her as a leaving present using my photos; capturing as many of the shows, communities, and people involved as possible – think of it as a Nofit State Circus family photo album. Although I realised this was going to be a serious amount of work, I still massively under estimated the amount of work it would take. I finished the book and called it ‘Let’s Do It Again’, it was great, but I realised that it was not the book I had been dreaming of.

This project is about that book; a coffee table book full of the wonder, passion and beauty of circus, suitable for all. A book that still covers all the shows but whose focus is the photography whilst still capturing the feel of those shows.

I have taken ‘Let’s do it Again’ as a prototype, edited it down significantly, increased the photo size and quality, added some new photos, changed the structure, included a little more text and looked at better print methods. The work on the book is mostly done.

To make this book a physical reality the next step is printing it. This kickstarter is to enable that to happen by taking pre-orders to cover the printing, design and delivery costs.

The book is called ‘In nofitstate’ and is for anyone who likes Nofit State, circus or photography. If you like all three then perfect.

It contains over 230 photos dating from 2004 to 2017 and has sections covering community, the shows from immortal to block, backstage shots, and people.

To find out more about the project, visit Mark’s Kickstarter page and SUPPORT!

Last year, I left the country for about five months. When I came back, Cardiff was covered in beautiful, huge murals all over some previously pretty ugly buildings. I’d missed when it happened, but it was the doing of the lovely Modern Alchemists, through a project they organised called the Empty Walls Street Art project.

They’re running another Empty Walls festival this year! They’ve got a Kickstarter, and YOU can help them make it happen. I’ve pledged fifty quid towards it, because frankly Cardiff is streets behind other cities when it comes to street art and murals (like Bristol!) and I love looking at them around the city.

“Our aim is to bring colour, culture and vibrancy to the city of Cardiff by creating an outdoor gallery of public murals,” they say. The money is going towards the hire of cherry pickers, scaffold and ladders. The more they can fundraise, the bigger they can go!

PLEDGE SOME CASH TOWARDS THE EMPTY WALLS FESTIVAL HERE. In exchange for pledges of £5 or more, you’ll get stickers, tote bags and other merch in return. And help prettify our city! What’s not to love?

If you need convincing, have a look at what they did last time… 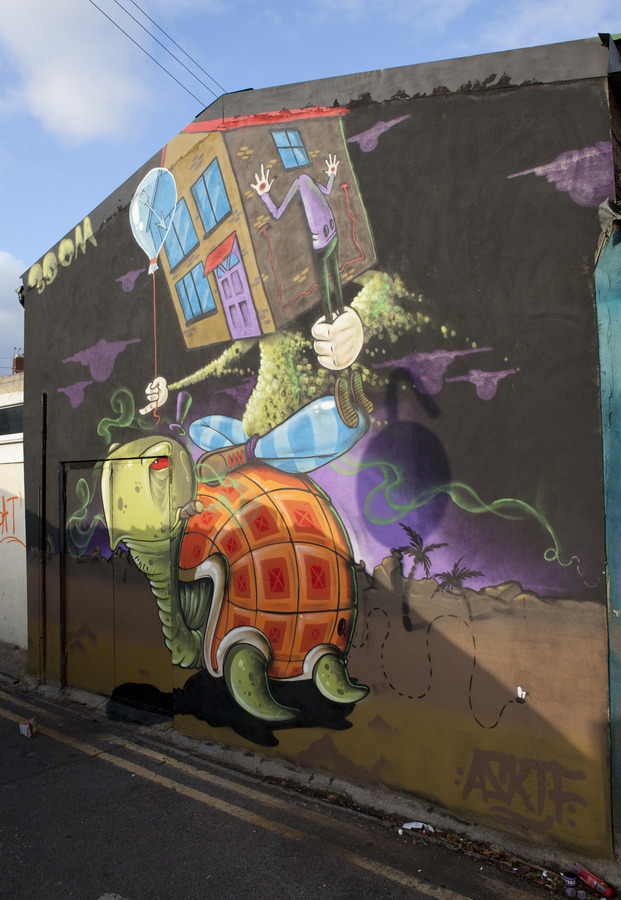 They’re planning something pretty ambitious this time too…

“We are proposing to have access to the Museum’s collection of artworks that draw upon British/Welsh folklore and heritage.

“We feel that the artists that come here to participate in the festival should receive a sense of place by being given an opportunity to be influenced by the rich heritage and stories that lie beneath the surface of British culture. We’d like the artists to submerge themselves in the National Museum’s collection, enabling them to create inspired works that reflect the stories once told by inhibitors of the welsh landscape. By selecting specific works to re-interpret or by drawing on conceptual or aesthetic elements they will translate their ideas into art works in the streets of Cardiff, allowing a riot of communication through old and new existing art forms. These layers of paint will tell the story of this unique form of expression and will echo the cultures past and stories forgotten.”

PLEDGE YOUR SUPPORT FOR THE EMPTY WALLS PROJECT 2014 HERE! NOW!