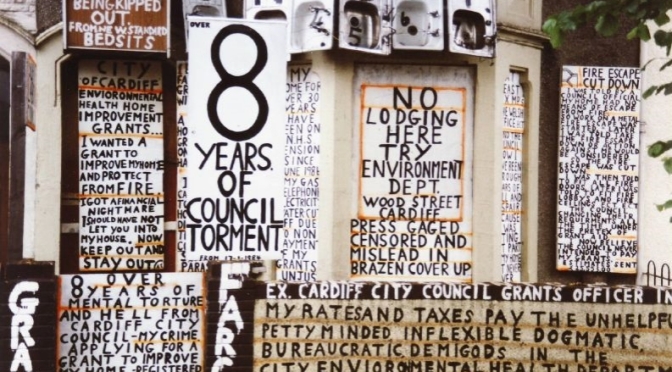 I recently spent a few hours lost in the internet when I came across Nick Sarebi’s wonderful photographs of Cardiff in the 1980s. I messaged Nick who kindly agreed to let us publish them, and even did a mini interview with me, which I present, here, for you. Do enjoy this wonderful dip into the archives, back into Cardiff in the late 1980s and very early 1990s. Over to Nick … 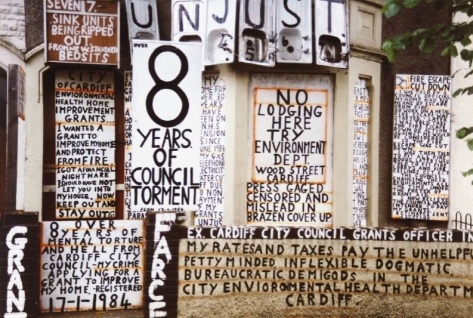 Nick: I originally came from London. I lived in between Grangetown 1988 – 95, although I was still working in London for much of that time. I always thought Cardiff was a lovely city.

I was doing a City and Guilds photography project at the time. I loved the sense of history that the Docks had, and obviously it was just on the cusp of change. I wish I took more photos back then, but it was before digital.

I lived in Pentrebane Street in Grangetown. I remember my neighbour saying that she knew Shirley Bassey and went on a works outing with her, where she sang, but then again everyone claimed to know her at that time! I think there were still close-knit families in Grangetown then, which was changing at that time. The neighbours were all very friendly. The house was covered inside with Artex when I bought it. It took ages to scrape off, I must have been mad! 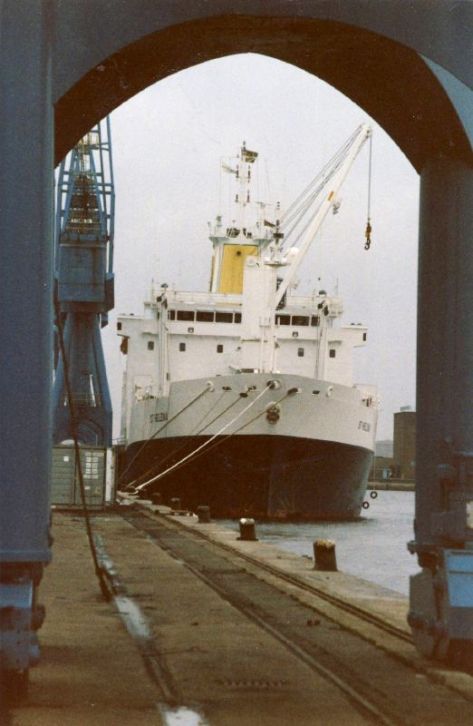 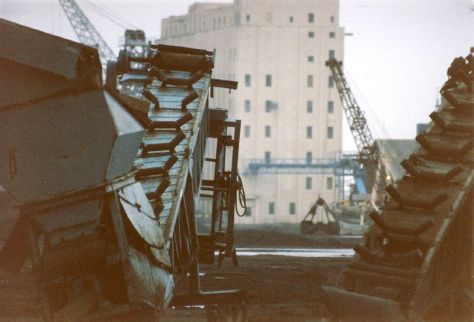 Nick: I loved wandering round the Docks at that time, before it was all developed. It was pretty much deserted at the time. I also remember visiting the Sea Lock and some other Docks pubs. I wanted to go into the clubs down there but was a bit wary as an outsider. The Sea Lock was definitely stepping into the past. The main bar was closed and they only had a tiny bar left open. They frowned on women going in there alone! It was demolished soon after, I think. The publicans were really friendly. I recommend Trezza Azzarardi’s The Hiding Place – it’s a brilliant take on Tiger Bay. It conjures up Tiger Bay so well for me I had to go back and take another look. It was criminal how the knocked the place down. It can still be seen in the classic film Tiger Bay, which you should watch if you haven’t seen already.

There’s a nice interview with Neil Sinclair here, talking about the story of the place that inspired the Tiger Bay musical that was out year  …

I remember meeting Neil Sinclair, who is at the start of Tiger Bay talking with Hayley Mills. We met at a nice pub which was on the Bay front and was very isolated, out on the way to Penarth. This was before they built that flyover. I forget its name, I think it must have gone now.

Nick: Why did I move to Cardiff in the first place? That’s a good question. I wanted to move out of London, as it was expensive to buy a house there (even then!) and it was so big. Of course, no one could imagine that house prices would rise to the crazy levels they are now…

I couldn’t decide on Bristol or Cardiff. My girlfriend at the time lived in Bristol, but we split up just before I moved, so I chose Cardiff. In retrospect, what was mad was not looking for work in Cardiff. So I just travelled thousands of miles up and down the M4!

Eventually after Cardiff I moved to Bristol and I worked there for a couple of years, but was offered a part-time job in London, which went from two to four days, so I started commuting again, from 1997 right through to 2013.

I now look back and wonder why I did that! I spent seven years in Cardiff, but somehow it doesn’t feel that long – it flew by. I arrived in Cardiff only a few months after Lynette White was murdered. Someone wrote a book on it called Bloody Valentine, but it had to be pulped for libel reasons. 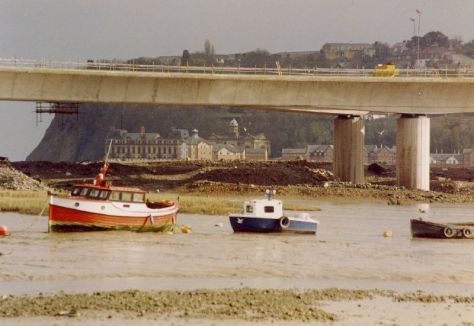 Nick: It was a bit ridiculous travelling backwards and forwards to London for all those years I lived in Cardiff. Cardiff was all changing at that time. I studied at the Arts Centre – I can’t remember what it was called now.

I have visited Cardiff a few times since I lived there, walking all round the barrage with my son, and have been to watch my team, Fulham, play Cardiff. It always brings back memories. I’m glad I lived there when I did, and saw the bay before it became “the Bay”.

Thank you so much Nick! He has a couple of really great albums of 1980s photography. We particularly love these albums:

And of course, his Cardiff in the Eighties album in full.

To see more of his photography, visit Nick’s Flickr page.

In case you’re of this persuasion, yeah, we be grammin. Follow us @WeAreCardiff.

26 year old Abdullah Yahia has to be one of the most inspiring fashion photographers working in the city, destined for big things. Follow him for ethereal landscapes and his forthcoming film work …

“The world breaks everyone and afterward, some are strong at the broken places.” 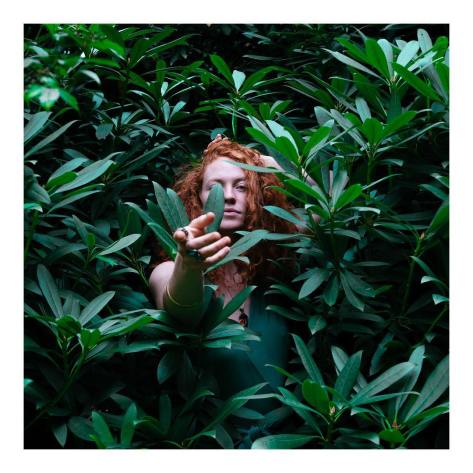 Okay, she’s not strictly based in Cardiff, but she comes here to shoot a lot and her wildlife photography is just wonderful! Big shouts!

Beautiful sights are on our doorsteps, quite literally. I went for a late evening walk on the Garth on the off-chance that I might see the Almost full July 'Buck' moon rise over Cardiff, and I wasn't disappointed 🙂 though the blue hour photo doesn't really do it justice

For unexpected angles of this wonderful city of ours, get on 18 year old xeno.v (aka Qureshi)’s feed. He posted one of our most viewed IG photos of last year – the beautiful shot of the ‘Cardiff eye’ from Winter Wonderland last year.

For ongoing documentary of what’s happening in the city, follow Chris’s feed. Also does a tidy line in tees and other merch. ilovesthediff.com

The official feed for the Bute Park Arboretum – Cardiff’s premier park with a nationally-significant tree collection! Follow them for adorable hedgehog photos and the life and times of our wonderful park. bute-park.com

One lost hedgehog means #Rangertotherescue This little guy had wandered into the #buteparknurseries and curled up for a knap. Now he's tucked up safe with some food and water in the workshop #lovebutepark

If you wanna see endless delicious posts of life around Cardiff mixed in with fashion, food and a mischievous Golden Retriever pup called Bungle, the Cardiff Cwtch is your gal! thecardiffcwtch.com

Happy Friday from @bunglethegolden and I! 💛 What are your plans for the long weekend? #nationaldogday

While we’re talking about food, there’s one Cardiff blogger you have to follow, and despite what his name might suggest, this is food that even omnivores will be desperate to devour. Don’t believe me?? Just head over to 25 year old Gaz Oakley’s feed and see for yourself… avantgardevegan.com  /  YouTube for Recipe Videos

STEAK, CHIPS & PEPPERCORN SAUCE🔥LINK IN BIO FOR MY NEW RECIPE VIDEO!!!! I want to show people that anything can be veganised. These steaks are incredible. Find out how I make them by clicking the link in my bio and watching the video. 🙏🏽 thanks so much!! Gaz @gazoakley • • • • • #vegan #vegans #vegano #veganfood #vegeansofinstagram #veganlife #veganfoodshare #veganlifestyle #veganism #veganfoodporn #foodporn #foodie #food #cardiffvegans #welshvegans #cardiff #wales #vegetarian #avocado #vegancake #avocado #vegancommunity #bestofvegan #letscookvegan #veganguy #avantgardevegan

It’s a bit of a no brainer to say you should be following @igerscardiff … collaborating Instagrammers who meet in Cardiff. Photowalks, Socials and Competitions and part of the Igers Network! igerscardiff@gmail.com

CARDIFF BAY INSTAMEET THIS SATURDAY @  1pm Meet @ Pierhead Building Join me and a bunch of other Instagrammers for this Instameet as part of Instagram's 16th worldwide meet up. This is an informal and FREE event for Instagrammers and photo enthusiasts to meet up in the real world – exchange ideas, socialise and take some photos together. Make sure to tag your photos with the hashtag #WWIMCardiff #WWIM16 Any questions just DM me and if you're coming along please comment below This photo is of the "Weeping Window" of poppies – an art installation outside the Senedd building; we'll have a opportunity to get some photos of that (as it leaves on September 24th) as part of a small photo walk – about 2 hours around the bay. Kind thanks to @igerscardiff and @minutemanwales for spreading the word. #MyTelegraph #photography #travel #senedd #lppathfinders #weepingwindow #wanderlustwales #igerscardiff #cardiff #walesonline #igerswales #wales #FindYourEpic #cardiffbay  #DiscoverCymru #igerscymru #thisiswales #thewalescollective

Beautiful shots from around the city – filtered!

Lorna Cabble is one of our fav USW-graduated photojournalists! Follow her feed for news of projects around south Wales. m.facebook.com/LornaCabblePhotography

It’s pretty cool that our National Assembly has its own Instagram feed … follow for events around the building and the bay, and to follow the law-making and government-scrutinising process in action! assembly.wales

Mae’r haul allan o flaen y #Senedd – beth am ddod draw i weld y #WeepingWindow ac i fynd am daith o gwmpas yr adeilad? #Caerdydd #BaeCaerdydd #Cymru #Haf #TaithyPabiCoch The sun is out in front of the Senedd – why not come to visit the Weeping Window and go on a tour of the building? #Cardiff #CardiffBay #Wales #Summer #PoppiesTour

We couldn’t finish without including our very own rescue dog, Zelda. We rescued her from Cardiff Dogs Home last week, and she’s quickly becoming an Instagram star! I mean, we would say this, but we think she’s adorable. If pets on IG is your vibe, follow her! (More about how we got Zelda here: Meet Zelda)

Just checking out the view. It's okay I guess #cardiffeye #cardiffbay 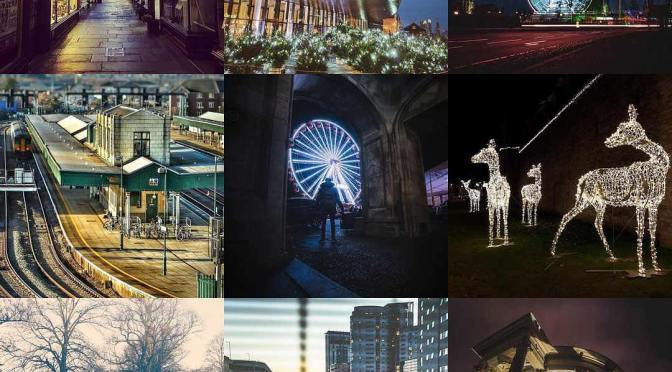 We’re welcoming in the new year with something easy on the brain, with our Instagram #2016bestnine.

If you’re a keen Instagrammer, you may already be following the We Are Cardiff Instagram account. We’ve just posted our #2016topnine over there, but for those of you who can’t be bothered with all that nonsense, we’re replicating it here. Below we feature the work of six very talented local photographers, so please click through to have a proper look at all their accounts and show them some love!

We use the We Are Cardiff Instagram to feature and promote some of the best and most unusual photography of the city, as seen through the lenses of YOU! And here are our top posts of 2016.

Then a tiny Christmas forest arrived 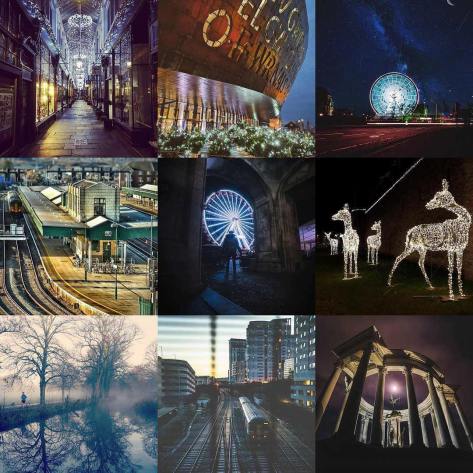 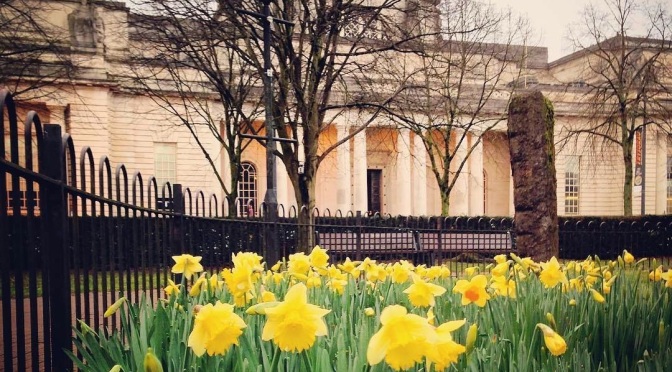 In March we handed over our Instagram to the fabulously talented @rhysioanannett who took some wonderful snaps of Cardiff!

Can you spot where these were taken? 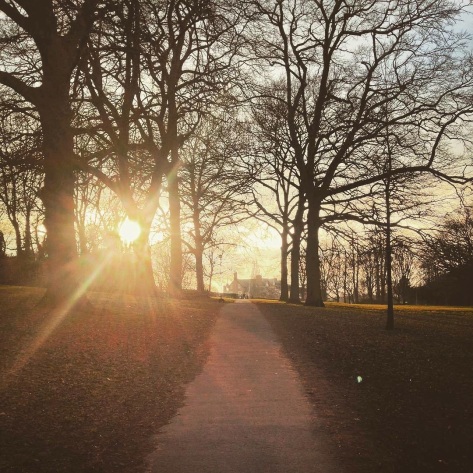 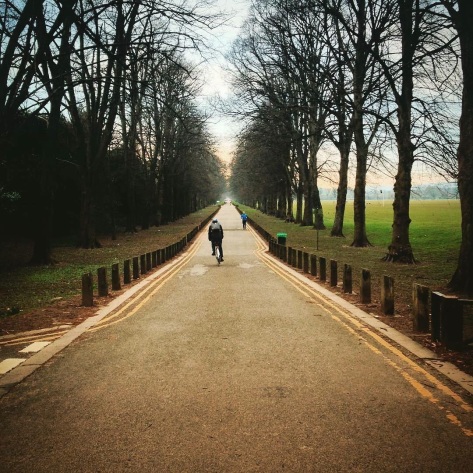 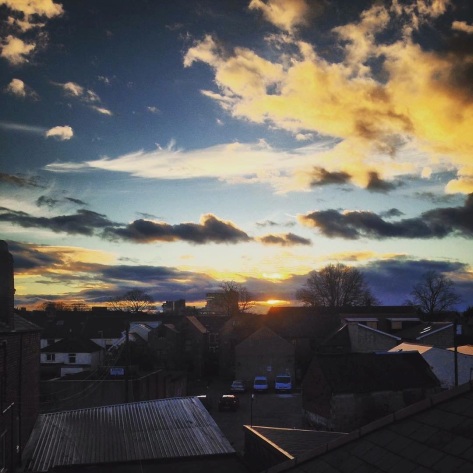 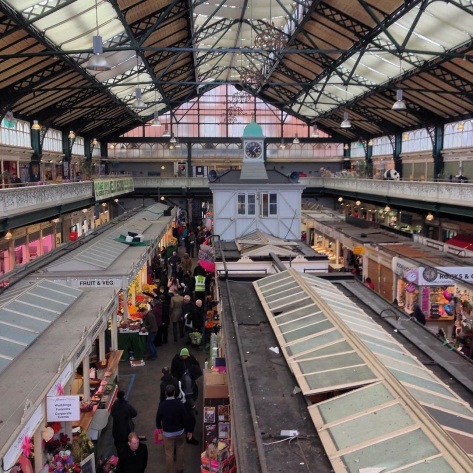 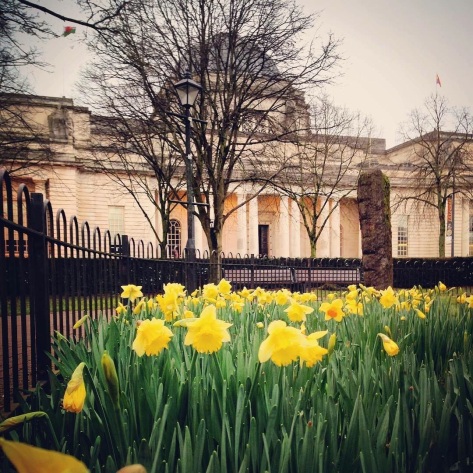 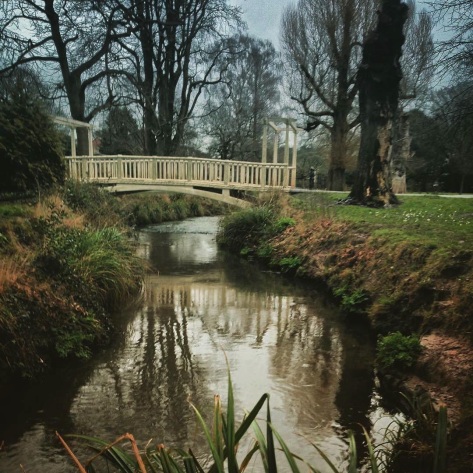 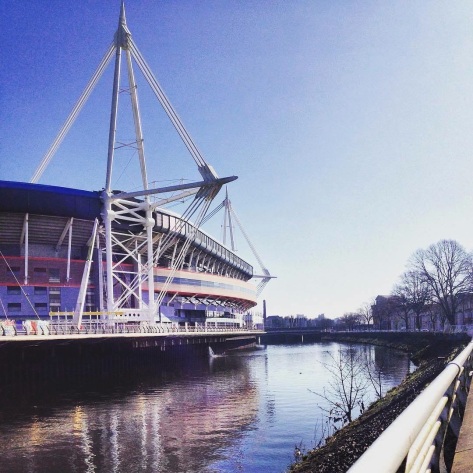 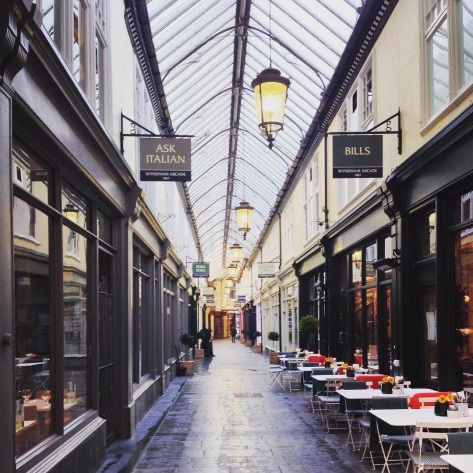 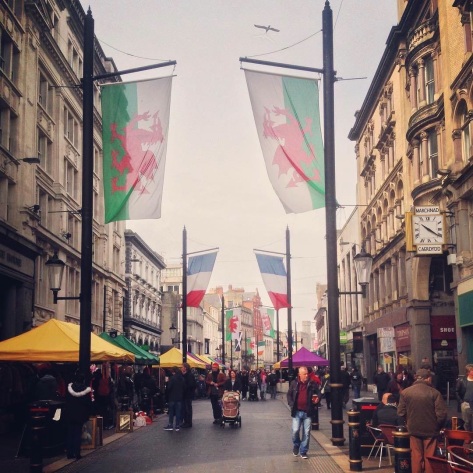 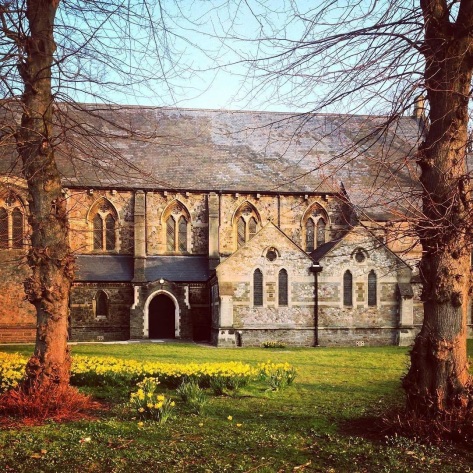 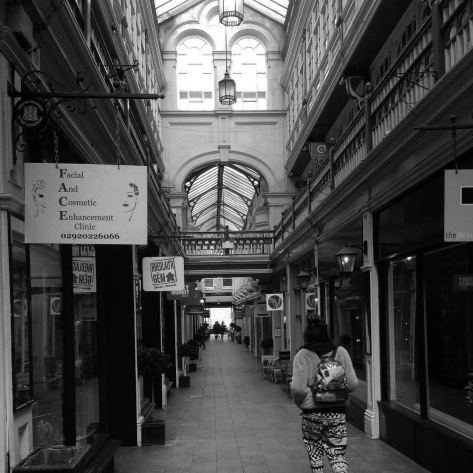 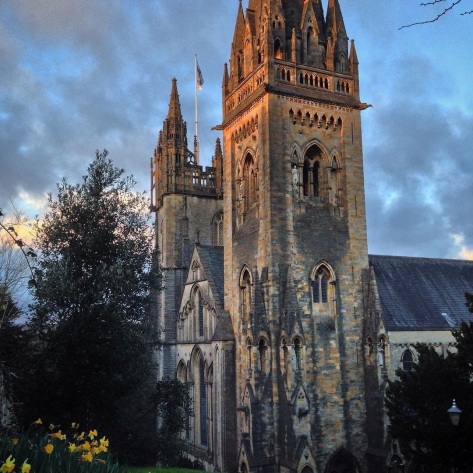 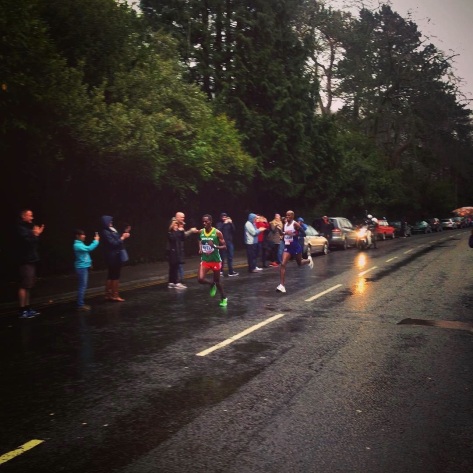 More information on all pics (including locations!) can be found in the March Facebook album.

If you fancy taking over the We Are Cardiff Instagram for a month, email us