Meera Vijayann began using digital media to tackle sexual violence in the aftermath of a tragic Delhi rape-and-murder case. In 2013, she won the CNN IBN Citizen Journalist Award for her reporting in the aftermath of the Delhi rape case. Her articles and blogs have appeared in the Guardian, CNN, Forbes, Open Democracy, IBN LIVE, The New Indian Express and other major media outlets.

She’s COMING TO CARDIFF to speak at the Pierhead in Cardiff Bay as part of the National Assembly’s Women in Public Life initiative at 6pm on Thursday 20 November 2014. AND IT’S FREE!

If you need convincing to go along to this, watch her TED talk

Vijayann spoke as part of the TEDxChange session at TEDxHousesofParliament, supported by the Bill & Melinda Gates Foundation. She is a Change Manager at Ashoka India, and as an elected member of the inaugural class of +SocialGood connectors, she facilitates dialogue between entrepreneurs, innovators and institutions to tackle global issues around gender rights and sexual violence.

***
Sign up for the weekly We Are Cardiff newsletter

Here are a few sneak peeks at the new We are Cardiff exhibition at the Pierhead, Cardiff Bay, running until 9th September 2011. Hope you can make it! 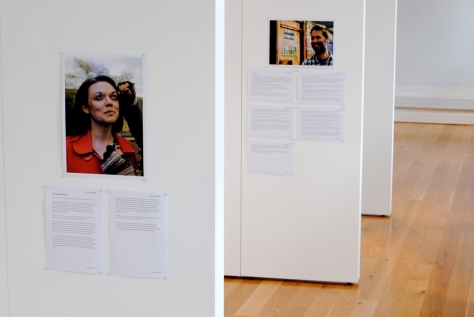 I grew up in Aberystwyth and had spent most of my childhood, teenage and adult years there – I moved away for a short period during university to study in Canada, but I’d never been away for longer than seven or eight months at a time – so moving to Cardiff is probably my first big break away from home. I probably shouldn’t be admitting this at close to 24 years old.

I’ve felt close ties to Cardiff for a few years now. Many of my school friends ended up here and I was a fairly frequent visitor for that reason. During university I also managed to form some ties with the Cardiff music scene – inviting a few (locally) renowned Cardiff bands to play in dingy back-rooms in Aberystwyth and travelling down here on a semi-regular basis for gigs.

I finally moved to Cardiff in June 2010 after having spent six months travelling to and from the city to spend the weekends with my partner. Moving here had been in the pipeline for over a year before I finally made the move – Hannah and I had agreed that we would both move here once she’d finished a number of internships abroad, it seemed like a logical place for us both to look for long-term employment. However, it took me quite a long time to find work, especially as I had a good, secure job in Aberystwyth that I didn’t want to abandon for something less appealing. In the end I’m glad I held out to find a job I wanted, as I now have the privilege of doing a job I enjoy at Positif Politics. I work with a great group of people and it’s an exciting time to be involved in public affairs/politics – what with the Assembly elections in May 2011, and the vote on further powers in March.

I have a fantastic cycle route to work through Bute Park and along the river, and it’s a brilliant way to wake up in the morning, and to finish off the day – though with the nights drawing in I shall once again be relegated to the dreariness of a commute on my beloved Cardiff Bus (that’s a lie, we really don’t get on very well at all but there’s another story for another day). I feel privileged to live in a city with so much green space, I live almost exactly halfway between Bute Park and Roath Park and there are plenty of other spots to go hide in scattered around. The city is also surrounded by beautiful countryside – the view from Castell Coch is one of my favourite in the world.

Cardiff is also giving me the opportunity to further indulge my love of music. The annual Swn festival is a great chance to enjoy music around the city in a condensed format – it was brilliant fun this year. Going out to gigs in different clubs and pubs has allowed me to meet some interesting characters and make some fantastic new friends.

Cardiff seems to be a great place to be for music at the moment, I feel like the city is on the cusp of something quite brilliant with a number of fantastic bands beginning to emerge and a seemingly thriving community-based approach to the arts and culture. My particular favourite of the current crop of Cardiff based bands (like so many others) are of course the wonderful Islet. But the hard work and dedication of so many others is really at the heart of what is going on, and for that I thank all the citizens of Cardiff who try so very hard, and more often than not succeed in making this city a wonderful place to live and work. Apart from the buses. I hate the buses.

Matt Williams is 23 and a bit years old and lives in Cathays with his partner Hannah, close friend Grace and two Guinea Pigs, he works at Positif Politics in Cardiff Bay and tweets at @mdwaber, he can also be found online at LastFM. In his spare time he tries to attend as many gigs as humanly possible and dances badly to loud music wherever he can find it. He can also often be found somewhere in or around the city exploring on his bike.