Beth Girdler-Maslen takes a tour around some locations in Cardiff that you can see on the small screen! Fans of Doctor Who and Torchwood, take note!

Doctor Who is a cult classic television programme that is out of this world, in storylines and in Daleks. Exploring outer space is something that not many of us normal people (who aren’t timelords) get a chance to do, which makes Cardiff the perfect place to take a walk down memory lane and discover the amazing filming locations of the iconic BBC show. The Doctor Who Experience sadly closed down a year ago, but there are many walking guides and other places to indulge in your ‘Who’ obsession. Here’s a Cardiff based guide for Doctor Who locations to follow and maybe find some aliens along the way.

Cardiff Bay is the perfect place to go for all BBC filming sets, with Sherlock, Torchwood and Doctor Who all being filmed there. Roald Dahl Plass is the home to The Hub, Torchwood’s headquarters, a spin-off to Doctor Who. On the Space-Time Rift, the TARDIS can also use this spot to re-fuel. The Millennium Centre has been used for scenes in Doctor Who and appears in the background for Torchwood. The lobby has been used for hospital scenes, like the Cat Hospital in the 2006 ‘New Earth’ episode and another hospital for the 2011 episode, ‘The Girl Who Waited’. A little bit further down the bay, you can find The Shrine to Ianto Jones, a permanent memorial celebrating the life of the Torchwood character who ‘died’ in 2009. I had a look at it not too long ago, wondering who he was and was surprised and confused to see so many tributes from people all over the world, from Spain, France and Finland, to name a few. A weird and whacky find for those who would like to pay tribute and for others to have a bit of a giggle. Eddie’s Diner is used in two episodes and is a disguise for the TARDIS. Clara goes through a toilet door to a console room in the series 9 finale and Matt Smith later enters through that door. The American diner is now a regular tourist spot.

Cardiff Castle has been used for multiple episodes in Torchwood, the Sarah-Jane Adventures and Doctor Who as well as Sherlock (it’s the castle where Moriarty stole the crown jewels). It was used for the series 6 two-part episode ‘The Rebel Flesh’ and ‘Almost People’ as well as ‘The Snowmen’, the Christmas special episode.

Again, the National Museum is in lots of episodes of Doctor Who, like ‘Dalek’, ‘The Lazarus Experiment’ and ‘The Big Bang’. Its probably most memorable for ‘The Day of the Doctor’ 50th anniversary special with previous doctors, David Tennant, Matt Smith and John Hurt. An alien exhibition was held there, Vincent Van Gough visited, and it has been used as a base for different museums seen in the show.

As an open-air museum documenting Welsh life from decades ago, St Fagans was the perfect setting for the two-part episode ‘Human Nature/The Family of Blood’, set in 1913. ‘The Woman Who Lived’ was also filmed there for series 9, starring Maisie Williams.

Best known for shopping and a very popular place in the city of Cardiff, filming Doctor Who was a public affair with tons of fans pouring in to catch a glimpse of Peter Capaldi. Who can blame them, when the Doctor, the TARDIS and Cybermen were in the centre of Cardiff?

The Main Building of Cardiff University is consistently used as the fictional Bristol-based St Luke’s University for the Doctor’s companion studies. Alexandra Gardens, a beautiful garden behind the main building and near the Bute building is the location for the series 3 finale ‘Last of the Time Lords’. The angels in the gardens also look like the angels from ‘Don’t Blink’, which is something to keep in mind as you walk through!

Take a walk along Westgate Street and you’ll find a hidden alleyway, that the Doctor and Clara found in ‘Face the Raven’ and where Clara meets her death. A sad visit but an exciting one, where you can disappear down a secret street. 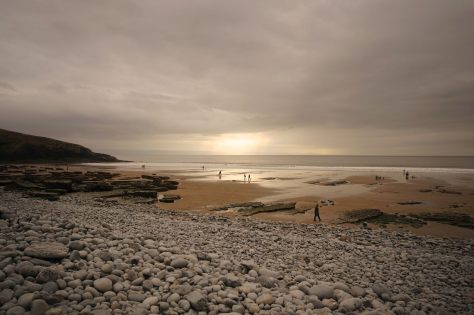 A bit outside of Cardiff but worth the journey, Southerndown Beach has been used for numerous episodes but the most memorable and heart-breaking one has to be Rose’s exit from the show. Dead in her own universe and stuck in another, Rose and the Doctor meet on the beach to say their final goodbye. A tear-jerker episode and a beautiful place to visit for all the Whovians to re-enact the emotional moment.

This piece was by Beth Girdler-Maslen – Beth is an English Literature and Journalism graduate, with a love of books, running and pugs. An aspiring author and journalist, you’ll mostly find her compulsively writing or with her nose in a book. Follow Beth’s Instagram: @bethgirdlerm / Follow Beth’s Blog – Reading On The Treadmill

I have returned to Cardiff Bay, in order to pay my respects at Ianto Jone’s shrine. I am not alone in doing so. People visit from all over the world to remember this hero “who gave his life in defence of the children of the planet”. Below is his obituary:

Field Agent for the Torchwood three, Ianto Jones regrettably passed away in his hometown of Cardiff aged 25, while in the line of duty. His partner, Captain Jack Harkness, survives him.

Remembered for his heroic actions he will be sadly missed.

Mild-mannered and reserved, Ianto was initially employed as a ‘tea boy’ by the Torchwood Three. However, his actions gained him the trust of Captain Jack, and their relationship blossomed.

He was also known for his sense of humour. His mourners recall many a good humoured moment, such as when he bought a wedding dress for a friend. The shop assistant walked up to him as he was holding the dress to a mirror. Upon hearing Ianto’s explanation for his actions, He very tactfully informed him that he had men buying wedding dresses for their ‘friends’ all the time. LOL!

Rarely has there been such a national outpouring of grief, as for Ianto. His mourners visit the shrine on an hourly basis, leaving flowers and messages of grief. Some mourners clearly have reacted angrily to his passing, with suggestions that his death could have been avoided. Who knows?

I, myself, sensed some otherworldly intervention, when I arrived home after my initial visit to find my photos had been wiped from the memory card. Had they been erased from beyond the grave?

Upon my second visit, I decided to stay longer paying my respects. I was amazed at the diversity of the mementoes. There are Christmas decorations, coffee cups and, heaven forbid, even underwear. Well, the mind boggles!

As with Elvis Presley, some of his most devoted fans have even gone as far as to suggest that he is still alive. He’s not dead; he’s just gone globetrotting, apparently. They’ve even posted photos from around the world to ‘prove it’. There are also Christmas cards, and 30th birthday balloons, a milestone he sadly never reached.

I noticed for the first time, upon my return, a photo upon which was scribbled Ianto’s final words: “Don’t forget me”, and Captain Jack’s response: “[I] never could”. My photos didn’t erase after this visit, so maybe these words were a message to me from beyond the grave. It certainly brings a tear to my eye. Sob!

I hope you take a quiet moment to study my photo gallery. If you felt moved, upon visiting Ianto’s shrine, I’d love to hear from you. Thank you for reading!

You can find the shrine on the waterfront in Mermaid Quay, Cardiff Bay.