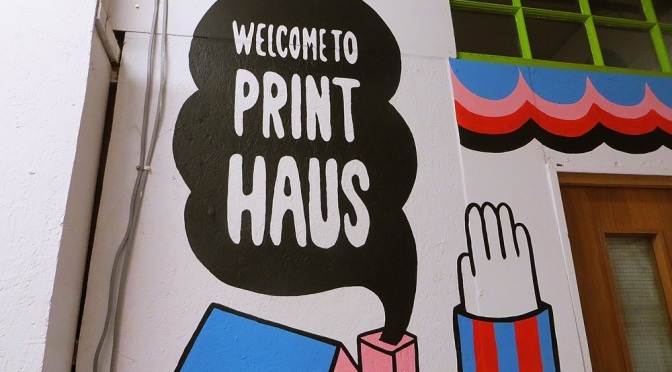 We sent intrepid explorer Benjamin Newman off to Canton to get to the heart of the arts oasis of the Printhaus. 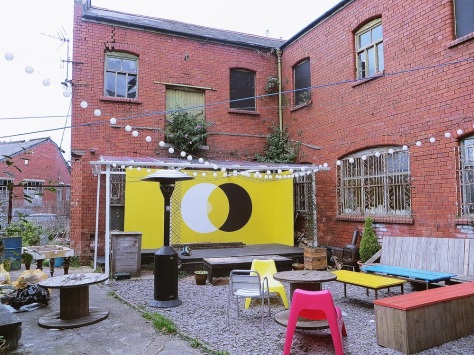 Just off Llandaff Road in Canton, in a pretty non-descript part of Cardiff, lies a green splash of colour. It’s hidden away from the aged, red-brick of Canton, and it’s known as the Printhaus.

In many ways, the “just out of sight” nature of the Printhaus extends to the Cardiff art scene as a whole; the entire scene is buried a little under the surface, it just requires a little effort to find it. In fact, it’s located a “stone’s throw” away from the Cardiff art epicentre of Chapter, so it’s geographically pretty linked up with other Cardiff art spaces. As you walk into the entrance and see Cardiff artist Phil Morgan’s art painted on the walls you know this a place where local art is the goal and passion.

The Printhaus is essentially an arts collective offering a variety of services mostly focused on screen printing, but they also assist in general arts services. More than anything, they are there to bridge the alarmingly wide gap between art education and art industry; it is places like the Printhaus that facilitate people’s interest in art or help streamline their ideas further. They offer their impressive line of equipment for hire, including: 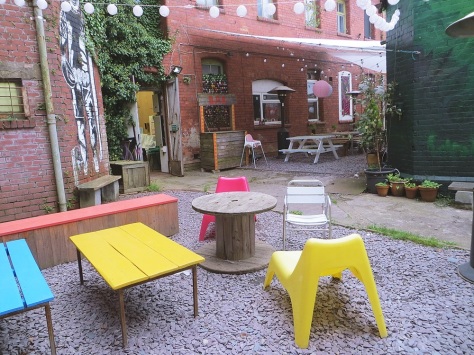 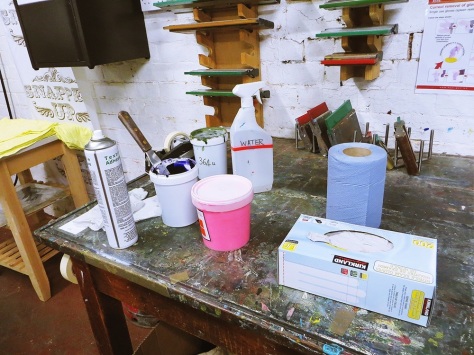 A variety of screen printing courses are on offer, too, for really decent prices. To see the the Printhaus as simply a service centre for art would be short-sighted. What I discovered from spending some time there and conversing with the managing team of Jude, Tom and Nigel was that, at its foundation, the Printhaus is a space where art is cultivated and celebrated. During our 30-minute conversation we talked a lot about the fact that art requires some form of nurturing in urban spaces: we touched on topics like government funding, digital media, the impact of the art scene on Cardiff and the importance of tangible art in a world where art is becoming more and more digitised.

Whilst I originally intended to interview Jude, Tom and Nigel, it quickly turned into a fluid conversation. In a way, this showed how welcoming the trio were to anyone interested in art, really. They instantly made the Printhaus into a warm and friendly place, miles away from the stereotype that art spaces were elitist or unfriendly.

My original question was about whether the Printhaus received enough support from Cardiff, whether enough was being done to promote Cardiff’s art scene. Funding was mentioned pretty quickly. Funding, then, seemed to be an issue for the Printhaus, but that’s not to say the local council are disinterested in the Cardiff art scene. Despite only having one visit from the council, the Printhaus are part of the Family Arts Network, funded alongside funded organisations like Chapter, Theatr Iolo, National Museum of Wales etc.

The funding of £2500 was granted as a research development project to improve the Family Arts Network in Cardiff. However, the council, from what I gathered from the conversation, seem very focused on economics and are trying to model Cardiff after Swansea’s art structure – but the homogenisation of Welsh art is something that should be avoided. Trying to simply model Cardiff’s art scene after Swansea’s is disrespectful to the unique cultural fabric of each city. The council, though, are definitely on the right track in wanting to create a solid network between art centres in Cardiff. In a post-Brexit Britain, where isolationism and individualism are verging on pandemic, the need to network with the public, other centres and the city itself is more important than ever. The Printhaus are definitely trying to keep this alive, whether it be through educational classes or printing an infinite number of tote bags to impress Cardiff freshers.

The council sees art as a stepping stone into supporting the growth of small business, but urban art centres offer so much more than just business stimulation; they offer education, too. The Printhaus have worked with numerous youth groups, but Jude, Tom and Nigel seemed really passionate about their work with youth offenders. They provide screen printing activities and workshops for youth offenders and the results, from my perspective, are staggering. Screen printing is an excellent method to get into art as you create something tangible with high-quality – it gives artistic confidence. It’s not just an enjoyable activity for youth offenders, but it gives them a sense of achievement. The screen print is a tangible reminder that they can create something; reminders such as this is sometimes all it takes to set someone on the right path again. By creating something tangible and engaging their minds creatively, youth offenders can avoid falling into repetition; art can be a confidence-builder and sometimes confidence is all our most vulnerable need. Education is quickly moving into digitised art and media, but things like screen printing can remind students of the benefits of tangible, more traditional art forms. The sessions with youth and youth offenders is symptomatic of Printhaus’s role in the local community – it is not a place to simply make art, but a place that inspires your individuality and confidence.

Jude, too, mentioned that being in the Printhaus helped her finish her MA, in multi-disciplinary printmaking over in Bower Ashton (University West of England). Despite Tom and Nigel having little to no expertise in her degree discipline, they were able to help her at difficult points during her degree by providing a creative outlet and creating a space where she could freely bounce ideas off of them; the Printhaus, for her, was a place where she could refine other artistic pursuits. By being in an environment of varying disciplines, it allowed her to form a sort of artistic support network and this support, essentially, shows that art networks are still important in cities – they provide invaluable assistance for an artist of any discipline.

As I left the Printhaus I was impressed by how humble this little oasis in Canton was. It’s places like this who quietly keep the beating heart of Cardiff and Welsh culture alive. Check out The Printhaus’ website and pop down if you ever have the chance. You’ll get a taste of the real Cardiff, away from the rugby and alcoholic hedonism. 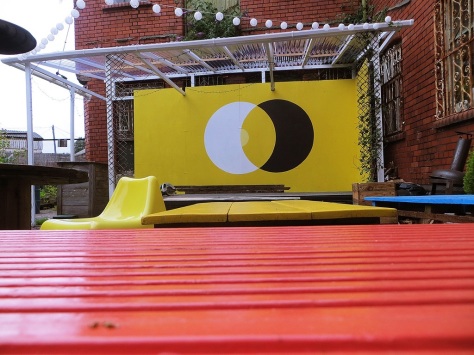 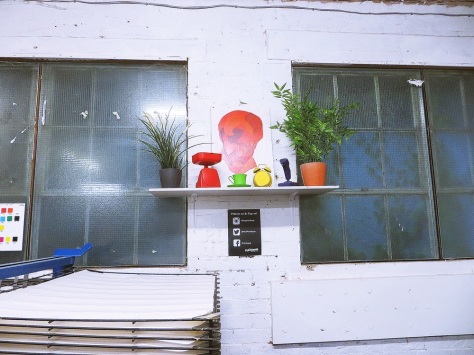 Dusty Knuckle Pizza have recently relocated to the Printhaus – so stop in there for a slice! There are also frequent open studios and their Snapped Up arts market are held there throughout the year, giving makers a chance to sell direct to the public. Printhaus even recently held its first wedding!

Benjamin Newman is an English Literature graduate situated in the Valleys. Passionate about art, music, literature, perfect cups of tea and pretending he’s a journalist.

Contributing writer Jodie Ashdown popped along to the Snapped Up Market at the Printhaus to have a go at some activities. Here’s what she got up to! 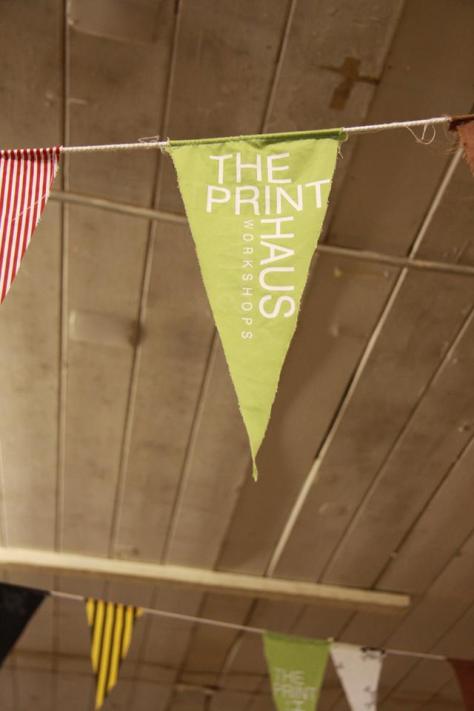 Sitting just off the main street, nestled in between closed hairdressers and Sunday drinkers is a special little place. A place that throws open its doors to the public so that they can print, shop, sew, hammer and drink craft beer to their heart’s content.

And this place is called the Snapped-Up Market.

Occurring quarterly, the Snapped-Up Market is a hands-on experience with activities suitable for adults and children and an overarching theme unique to that particular market. This time the market, which took place on the 6 April 2014, was focused around the theme ‘Furry Little Creatures’. Previous themes have included ‘Heroes & Comix’ and ‘Circus’.

Taking place in the Printhaus workshop on Llandaff Road, the market is a chance for local artists, artisans and generally artistic people to come along and show their wares, as well as giving us less-creative folk the chance to try our hand at making something awesome. 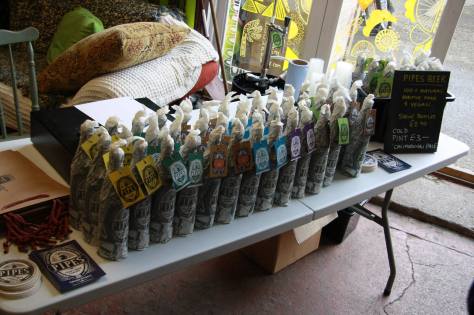 We are Cardiff headed down on the day to try out a few of the crafts and sample one, maybe two, of the beers.

The atmosphere is immediately uplifting, even in the dreary rainfall of a cloudy April Sunday. Everyone is friendly and relaxed, not just the stallholders and artists but also the customers who meander, coffee in hand, through the workshop under crisscrossed bunting surrounded by original art. The graffiti artwork adorning the outer walls is an accurate indication of the creative hub inside. We decided to have a go at a few of the activities on offer.

First up was Alys from www.thepocketpirate.com. Aside from selling, among other things, handmade cushions, fabric purses and bags, Alys provides you with the opportunity to make a leather purse. The procedure is pretty simple: you choose your leather, cut, mark, stick, sew, chat and then you’re done. A simple but effective project, all for £7. 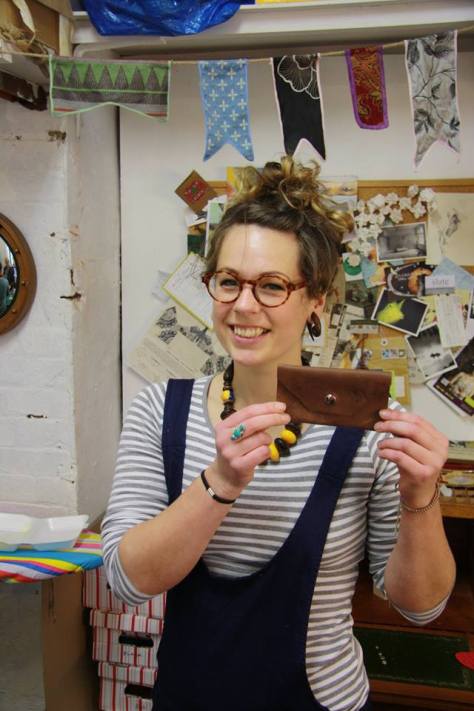 Next was Lydia who will guide you through making your own silver ring. It’s a satisfying process involving a hammer, acid and a blow torch. For obvious reasons, you have to be over 16 years old but it’s a pretty unique way of hammering out your frustrations and turning them into something beautiful. Lydia also has an array of silver jewellery on sale at the market and also does bespoke designs. Here’s her website: www.niziblian.com.

The printing part of the market came next. The Printhaus ( www.theprinthaus.org ) have a good stock of printing equipment which the team (Nigel, Tom, Jude and Rob) bought after some pretty solid fundraising, which can be used to put designs on all manner of things including t-shirts, tote bags and tea towels. They run courses on site and there’s an option to become a member, meaning that after training and induction you can use the facilities whenever you want for a small fee. They’re a not-for-profit organisation who want to help bridge the gap between school or college to starting a business by providing an art space and all the necessary equipment.

I began my printing escapades with Helen of www.nellystreasures.com who took me through putting a design onto a tea towel. Helen also had a clothing rail and other pretty special knitted items for sale as well as being a dab hand at screen printing. Next to Helen is the kids table where the little ‘uns can get in on the action, I don’t know what they were doing but it definitely sounded like fun.

Furnished with my special new tea towel, I headed over to the Print Haus guys to pick out a design for my t-shirt and tote bag. The guys will guide you through everything, even the oddly satisfying act of seeing your newly printed t-shirt drop all nice and warm out of the end of the tunnel dryer, it’s slightly akin to freshly baked bread. T-shirts are just £10 including printing and the tote bags are £5. 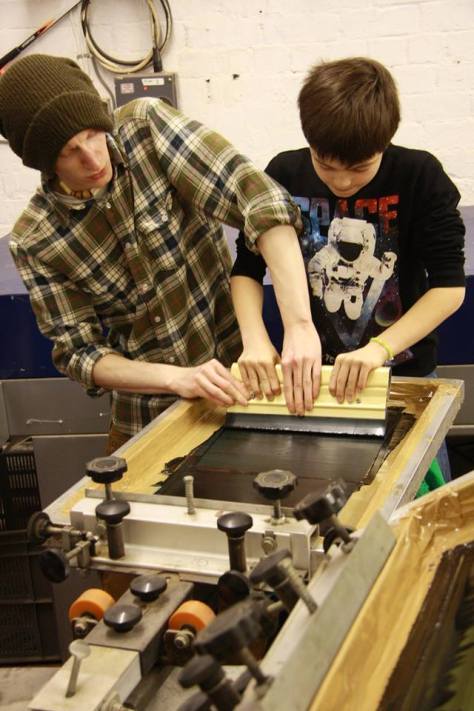 And there were other activities I didn’t even get round to, not to mention the many stalls and craft tables set up. It is a creative and friendly environment with a real sense of community with an admirable ethos; provide an accessible and open environment in which anyone can learn everything about printing and create one off designs. And not only that, the opportunity is offered to become a member and then display your wares at the Snapped-Up Market. The project is a breath of fresh air from the big brand, high street take over and is one which definitely deserves to be supported. 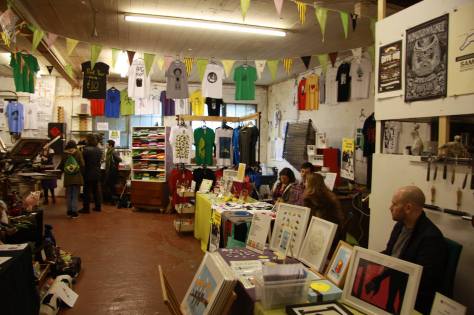 Run by locals, for locals, supporting locals and good fun for kids and adults. It’s a sweet initiative and something which Cardiff could really do with more of.

The next market is on 6 July – keep an eye on the Printhaus Facebook page for updates – and the theme is Wrestling. I’ll see you there.

Snapped Up Market Facebook page – next event 6 July for a wrestling-themed day!